Day 4 of our challenge proved to be even more challenging than previous days.  As many of you who live around here are aware, it's, um, COLD to say the least.  The high for today was below 30, with a wind chill of even lower, so we were both pretty torn.  Brave the cold, or settle for a treadmill?  Run on a hamster-wheel, or potentially freeze?  Decisions, decisions.  So hubbs opted for the dangerous option, running outside.  I, on the other hand, settled for a treadmill run.  Both of us had our struggles, though.
Mr. Hardcore set off for his afternoon stroll after bundling up.  His 15 miles were tough.  He was literally freezing for his run.  His water bottle had ice forming around the top, and his mask covering his nose, mouth, and neck started forming ice crystals from the condensation of his breath!  And at this point in the week, the challenge is taking its toll physically on him.  His back is aching, knees are sore, and the bottom of his foot is suspiciously starting to bother him....  He says it will be interesting to tackle these lasts 3 runs.  He may even have to settle for a treadmill run with me, seeing as the high for tomorrow is 29, not counting the wind chill.


My treadmill run was emotionally taxing.  First of all, let me tell you that I am not a very coordinated person.  I'm not coordinated in anything I do.  Fortunately, running doesn't require much coordination.  Concentration, yes, but not much coordination.  While I run outside on a trail or track, I can hold my own at a steady pace, trucking along.  Sometimes, I'll lose concentration and fall of the side of a trail, but I'll snap back into the groove and carry on, mostly unharmed.  However, let me tell you that a treadmill is different.  It requires concentration AND coordination.  I kept zoning out and my foot kept hitting the sides of the treadmill.  Every time my feet went off the rails, I was terrified that I would go flying off the back into the wall behind me!  This happened four or five times.  I'm not a fan.  Also, trying to stay focused on what I was doing proved especially difficult, considering I was trying desperately to distract myself from the fact that I wasn't going anywhere.  I was miserably bored.  Each mile dragged on longer than the one before.  But I did it, and it was nice that I could wear capris and a short-sleeved shirt and be comfortable.

Oh, and just so you know, this evening I got out of the shower and went to the living room to see this: 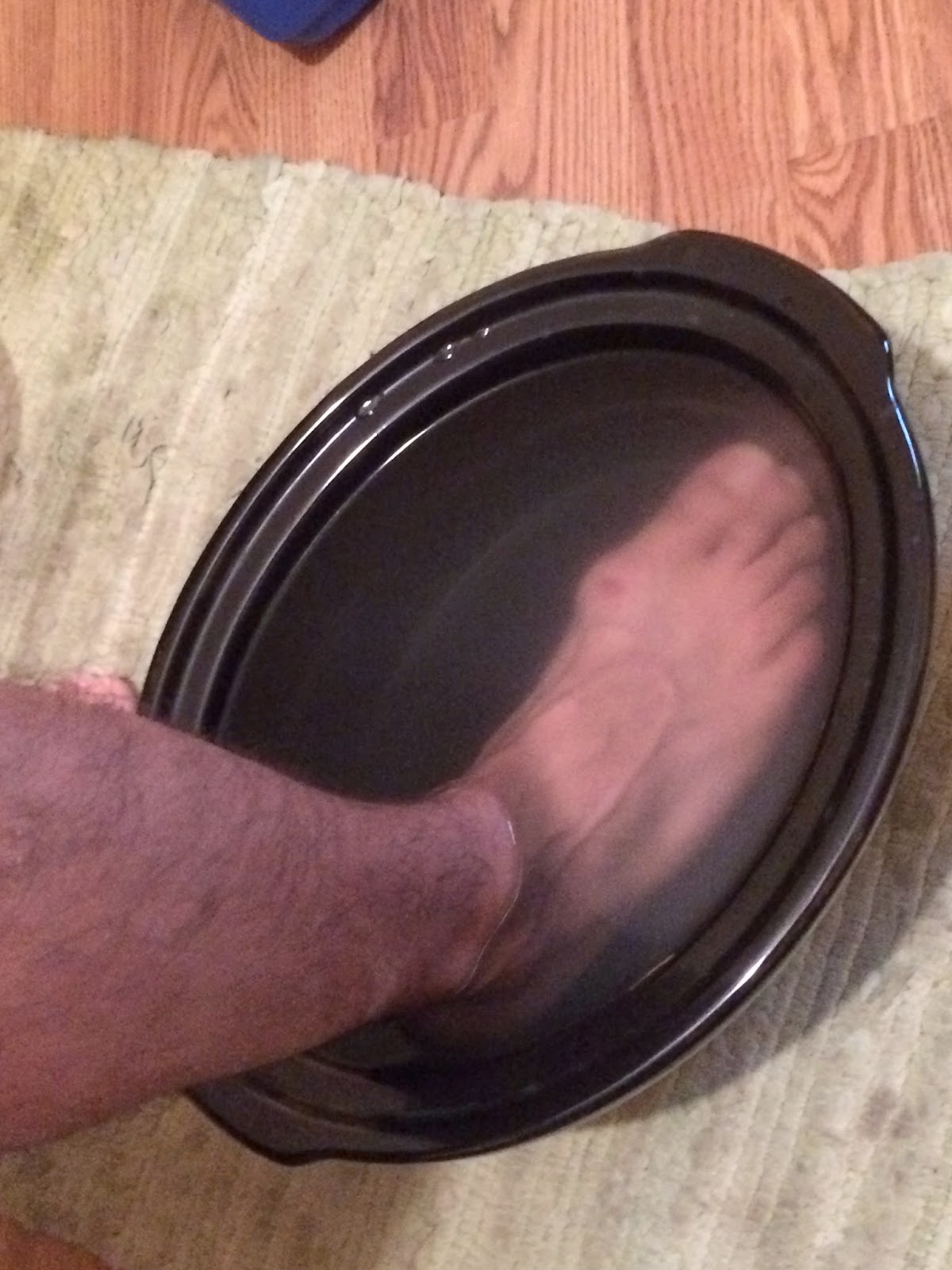 My lovely husband has his foot in my crockpot soaking it in hot water to make it feel better.  He was having a hard time finding a container big enough and sturdy enough to fill with hot water.  So he tore apart the kitchen and decided on my crockpot.  He promises that it will be sanitized by the next time I have to use it though, so it's all ok.