This weekend, Mr. Marathon and I took our show on the road…. or on a plane, more accurately. We headed south to sunny Fort Lauderdale, Florida for the A1A Marathon!

Our adventure began Saturday morning when we drove down to the Raleigh-Durham airport. We parked our car, and said “Peace out!” to the winter weather and left that freezing cold weather behind. Our flight was only a couple short hours, then we had landed in nice sunny, warm weather.

Our travels were easy, but once we got there, things were a little difficult. I know, I know, we were in Florida.  How difficult could it be? However, we had a ridiculously expensive cab ride from the airport to the hotel, we had a hard time checking into our hotel, and then we had another ridiculously expensive cab ride to find the expo, and then we somewhat got stranded at the convention center where the expo was held. Then, the weather got a little cold. Yeah, right, you’re probably thinking to yourself. But it really did! It was about 48 degrees by the time the sun went down! And we were wearing shorts and short sleeves. We got a little too excited for the warm weather, I suppose. Anyway, we also had some other stuff to worry about, like some stuff I needed to do for my substitute, and my mister had some school work to do, and we had forgotten a couple of things, like we always seem to do while traveling, and so by the time it was 10:30 that night, I was pooped, and I had hoped to get in the bed by 9! We were going to have an early morning! 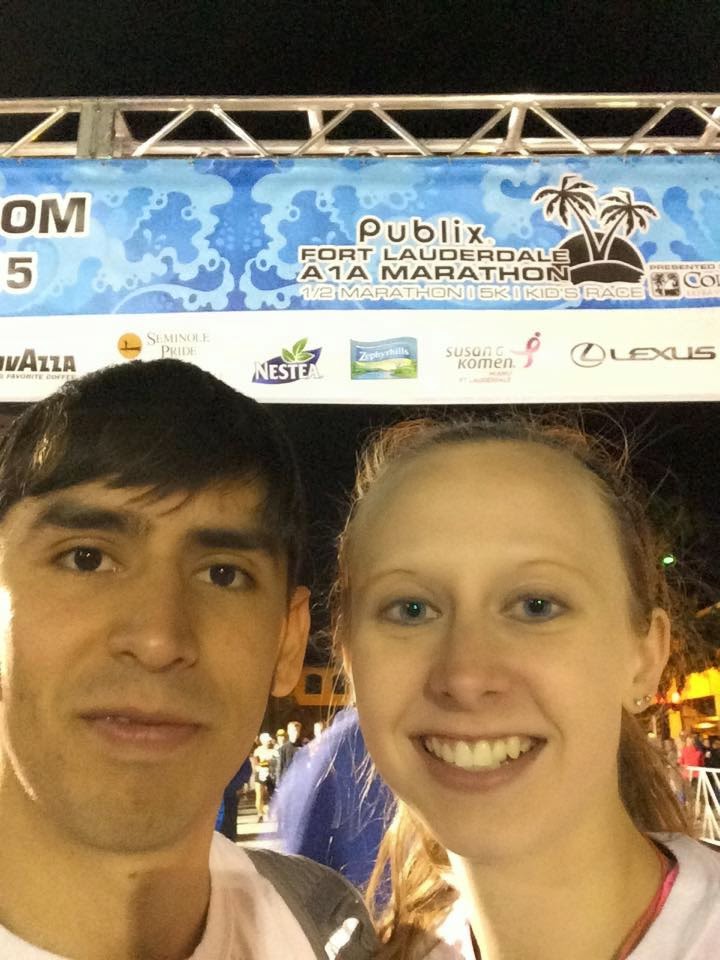 At this point, it was still dark. Fort Lauderdale was kind of still asleep, besides the hustle and bustle of the marathoners. It was very peaceful (and chilly!). I was also getting very nervous around this time, because I got to thinking about the lack of training I had put in for this race. I realized that I had put in some good consistent mileage in January in the WW3 challenge, but past that, I haven’t really been sticking to a plan or getting in any long runs. I had done a 10 miler and a 13 miler, but that was really it. I was terrified, but luckily, hubbs was planning on running with me! He had initially hoped that this marathon would be a backup Boston Qualifier, but since he got his qualifying time in Savannah, he decided that this race was all for me! Also, the day before it was Valentine’s Day, so it was a Valentine’s present too. However, a more suitable dinner came later that day, but we couldn’t mess with pre-race nutrition… ya dig?

I was so excited to spend all this time with him, considering we never run whole races together anymore. Yes, he comes back for me, but this time he had committed to staying with me the whole time! No matter how slow I knew I was going to be. This race had a 6 hour cutoff time, which to most people would seem like plenty of time, but since my previous time was 6:19, I was a little wary. But I knew with my personal pacer, I could do it! Maybe! It just took a lot of convincing to tell me that I could do it.
So instead of blogging about every single minute of the race, here is a photo journey through the rest of our run.

Finally, I want to take a second to talk about something a friend mentioned to me before going to run this race. She said “Make sure you have realistic expectations.” My expectations going into this race were not that demanding. I was thinking I would not even finish the race, honestly. I kept telling myself that I would at least have a good time in Florida, if nothing else. I said I wouldn't cave and run the half, but I might DNF (did not finish) the marathon. Either way, I had low expectations, and even lower self-esteem, considering my lack of training. But I am proud of my finish time. For me, and for me only. If any other runner saw a finish time for a full marathon, 26.2 miles was 5 hours, 53 minutes, and 30 seconds, honestly, they would not be impressed. If Mr. Marathon’s finish time was 5:53:30, you would say “WHAT WAS WRONG WITH HIM?!?!??!?!” But if I told you that my finish time was 5:53:30, an improvement of 25 minutes and 41 seconds, and that I crossed the finish line (relatively) strong, despite being completely mentally and physically drained, with tears of joy in my eyes, would you be impressed then? I hope so, because I sure am!

That being said, though, we don’t have any other marathons on the docket right now… besides the Blue Ridge Marathon for that crazy guy I run with…