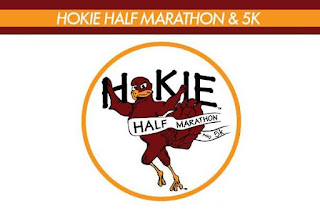 So, September is almost over, as it turns out. Tomorrow, to be exact. And I have realized that we didn't do a recap of our biggest event in September! OMG. So here goes:

We were planning to travel up to Blacksburg, VA on the weekend of September 17 to visit our running buddy friends that moved there not too long ago to spectate the Hokie Half Marathon. Turns out, some other friends of ours got hurt/sick and couldn't run the Hokie Half Marathon that they were already signed up for. Long story short, we ended up wearing bibs that said MIKE and NICK even though our names are neither Mike nor Nick. They were able to transfer their registration to us so we were able to not only spectate, but we were able to run the half marathon!

We went into this race with very different expectations, respectively. I am in the middle of marathon training and I had (spoiler alert: unrealistically) high expectations and hopes for a personal record since I had PR'd in April. People had told us that the course was surprisingly flat (psych), so I was like "I'M GONNA GO FOR IT!" Mr. Marathon just wanted to use this as a fun training run since he is focusing on the 8K distance for his cross country season (post on his first 2 cross country meets coming soon.... clearly I'm failing at being a blogger LOL SORRY).

We ended up traveling on Saturday for packet pick up for the Sunday race. We arrived fairly late, picked up our packets, and met our friends for dinner. I had my usual pasta, and mister had a pizza. I was real jealous. Then we headed back to our friends' house to get some sleep because we knew that the 7:00 AM start time would come really early. It was dark and cool when we got to the starting area on Sunday morning, and the sun was just coming up as we lined up in the starting corrals. I was supposed to start with Wave 2 at 7:02 but I accidentally got swept up in the Wave 1 runners... oops.

For me, this run started out amazing. I was maintaining right at my goal pace (actually faster by about 10 seconds per mile) and I was feeling great! It was at about the mile 6 water stop that everything fell apart. And I can pinpoint the exact second that it did. I always carry my handheld water bottle. I do it so I always have access to water and I carry my inhaler in the pocket of my water bottle in the event of an asthma flare up. This means that I don't get water at water stops. I will stop and get Gatorade in the second half of a half usually, but we were still at mile 6 and I was doing just fine. This particular water stop had tables on both sides of a rather narrow trail, so I didn't really have anywhere to go if I didn't want water besides straight down the middle. So that's what I did. Except, there were 2 people who had gone off to their respective sides to get their hydration, then they both decided to merge into the middle at the exact same time, and neither of them seemed to notice me. So they sandwiched me in between themselves, pushing my shoulders in and giving me an intense pain in my chest. Yes, it hurt, but not super badly. I was still able to breathe, but I was having some pain from it. The real issue occurred when this made me emotional. I get very emotional very quickly. My emotions began to run off without me, which set off my anxiety. I began thinking tons of anxious, irrational thoughts. I'm not going to be able to keep my pace anymore. They have ruined my race. I can't breathe right anymore. My inhaler can't help this. Oh crap, now I'm going to cry. Crying makes it impossible to breathe too. And once I start crying I can't stop. AHHHHHHHHHHHH.


It also just so happens that the hills pick up in the second half. There were also several spots of gravel trail in the second half which really slowed me down. It took everything I had to keep myself calm(ish) or at least to keep myself from crying. I came close several times but I managed to maintain my composure (outwardly at least... refer to the thoughts above). I ended up finishing begrudgingly with a time of 2:16:51, which was 3 minutes off from my PR. 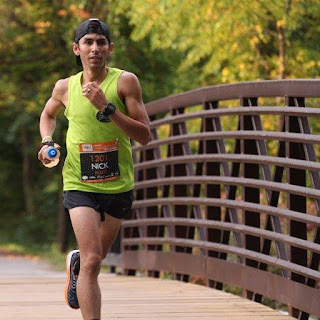 Mr. Marathon was running all footloose and fancy-free for the first 7 miles. He was just taking it easy like Sunday morning (oh wait it was Sunday morning...). But then, a spectator told him that he was in 39th place overall and he decided that he was going kick it. He wanted to pick his pace up since he was feeling so great, so he took off. He passed people left and right, and managed to move up about 20 places according to his calculations based on the information given to him by that spectator. Unfortunately, the spectator had apparently been wrong about his placing earlier because he ended up in 25th place rather than 19th place, which is what he was expecting. But still, he managed to finish with a time of 1:29:12, which was an awesome time that he wasn't expecting (he had told me he was aiming for an hour 45 minutes that morning)!

All in all, we had great fun with friends, we ate great food, and we ran some miles. It was a great weekend, and it was a fun way to get a long run in for my marathon training and it was an easy way for Mr. Marathon to get in a long run for his cross country training. He has had 2 meets so far this season (like I said- post coming soon.... ish) and he will have at least 2 more meets this season, possibly more. I will continue marathon training for the OUTER BANKS MARATHON (YES I HAVE DECIDED!!!!!!!) but other than that, I don't have anything major on the docket before then. So stay tuned for more ridiculously late blog posts about things that happened several weeks ago!