Last year, we had a fun time reminiscing about our 2015 and making our plans for 2016 around this time. So we decided to do it again!


2016 was a tough year for plenty of people, that's no secret. It seems like there are infinite memes on the Facebook about how much 2016 sucked. 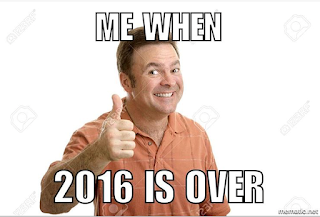 But for us, we actually had a pretty decent year. Let's review, shall we??

In the winter, we traveled to Charleston in January for the Charleston Marathon (and both hit personal records!), he ran 105 miles in one week for the the What's Your Wall? challenge again, he nailed the rail and I ran it, and we got to do the Martinsville Half Marathon again. Then in spring, participated in the Blue Ridge Marathon & Star K 10K then hopped a plane to BOSTON! Then we had a really busy month of May! In the summer, I did the Runner's World Summer Run Streak (and then some!) and we got to do a new 4th of July race! Fall rolled around and he did some running and Spartan-ing, and I did some running. In November, we did our second marathon of the year and I achieved my marathon goal (!!!!!!!!!!!!!!), I got pneumonia that sidelined me for several weeks, and he completed his second 24-hour ultramarathon! My pneumonia also derailed my 100+ miles a month goal, but I made it November 2015-October 2016 (12 consecutive months) before I had to cut back in November and December due to doctor's orders.

And now for our total running mileage from this calendar year:
HIS: 1,762.56 total miles in 2016
HERS: 1,122.68 total miles in 2016
PHEW! I'm exhausted just recapping all of this! As this year comes to a close, we realize just how much we have accomplished this year, in running as well as other aspects of our lives. Mr. Marathon is halfway through his Bachelor's degree, and I got a job teaching at a new school this past August!

We are so proud of all that we have done in 2016! In 2017, we have a few plans already in place. We will be traveling back to Boston for mister to run the Boston Marathon (4/17/17) again, and he plans to do the Blue Ridge Marathon (4/22/17). We also have plans to stay active, have fun, run a lot, exercise as much as we can, and take on other challenges/races as they come.

We wish you all a very happy new year and many happy miles in 2017! 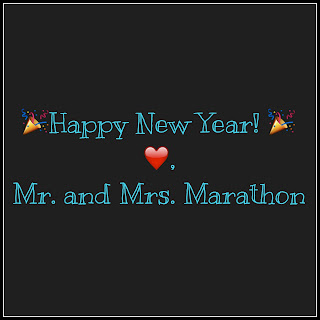