Mr. Marathon here. But more recently, it's been Mr. HALF Marathon. I did 2 half marathons in the month of March. And they were 2 very different experiences, but eventful nonetheless.

THE SLEDGE Trail Half Marathon 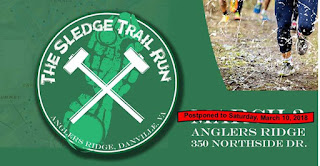 On March 3  March 10, I ran The Sledge in Danville, VA. (It had to be rescheduled due to high winds and downed trees from the day before.) I had taken an off week from my marathon training to have a 1 week taper for March 3. However, since it was postponed, my training did not allow me to take another easy week. So I had to hit the week hard and just see what I could do on tired legs that next Saturday. Needless to say, about 1 mile into the race, after hitting the first small hill, I knew it was going to be a looooooooong 12.1 more miles. My legs were feeling very shaky, tired, heavy, and overall taxed. So regardless of my placing, this was truly a 100% training run for me. It still ended up being a fun race because I normally don't run trails and I really do like them! 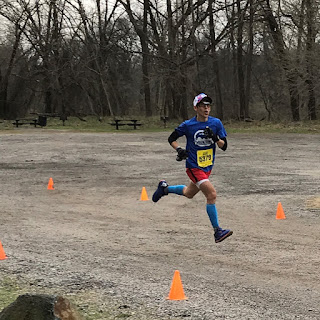 The best part about this race is that I have created a lot of friendships within the Danville running community, and it was nice to see so many familiar faces out there running, volunteering, and spectating. I really do enjoy events where a whole community can come together like that. Anyway, back to the struggle. I managed to stay steady, even though the hills were extremely draining, and there were plenty of them. As in, the whole race was hills. Yes, with the uphills, you get downhills! I love downhills.... just not that particular weekend. Since my legs were completely drained from the uphills and all my training, I was unable to use the downhills to my advantage like I usually do. Throughout the whole race, I stayed in 2nd place, just waiting to get passed. But surprisingly, that never happened. I crossed the finish line still in 2nd place overall with a time of 1:37:48! 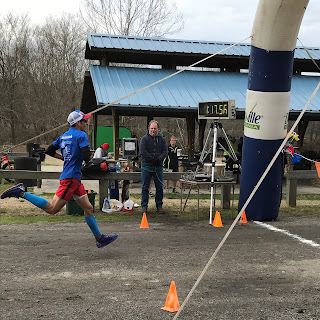 A short 2 weeks later, I was ready to run one of my favorite races again. On March 24, I got to run the Martinsville Bulletin Half Marathon in my hometown. This race was the real test for me, since it's on a challenging hilly course, but I have run it plenty of times and I train on the course very frequently. I had trained up for this race to be a "check in" of sorts before I do the Blue Ridge Marathon on April 21. I was really hoping for a personal record, but I honestly did not know what to expect.


Every single week, my training has been incorporating cross training, strength training, speed work, easy runs, and tempo runs. So I knew that I had a pretty solid base, but there's always that doubt in the back of your mind. I knew I was going to get to find out my true fitness level at this point. I did packet pick up the morning of the race. At the start, it was 30 degrees. It felt cold, but I still dressed in shorts and a tank because I figured (or hoped) that I would get warmed up pretty quick. As the gun went off, I had a goal to stay at about a 6:05 min/mile pace. However, I knew it would be difficult gauging this pace because of the uphills and downhills throughout the course. I knew I'd have to relax the pace going uphill and then kick it going down. I felt a lot better than I did 2 weeks ago at the Sledge. Over the years I have learned to run my own race, and that has helped me drastically. After half a mile, I settled into 2nd place. I knew that it was still early, so I just continued running my own race.


I felt great and strong running up and down the hills except for having a small snag with my shorts pocket. Long story short, I fought with the zipper and the zipper ALMOST won. I had all my Honey Stinger gels in the back pocket and had to wrestle them out. At this point, the guy who was in 3rd place was right on my heels. But I didn't stress about it because we had a quarter mile until the next big downhill. With this downhill, I opened the gap again, which I was able to see because we passed the turnaround point at around mile 8.5. I was feeling good, and at this point, I still didn't know what my finish time would be. After passing the 10  mile marker, I looked down at my watch at noticed that my overall time was 1 hour 1 minute. All I had left was a 5K..... a very UPHILL 5K. But I was on target for a PR so I knew I couldn't let up now. I stayed focused all the way to the finish line. When I was finally able to see the clock, reading 1:20, I took off sprinting and gave it all I had left and I ended up finishing with a new PR of 1:21:07, beating my old PR by 2 minutes and 4 seconds! I cannot express how ecstatic I felt! I went into this race not knowing what I could do, and came out with a great confidence booster. As soon as I crossed the finish line, I didn't have too much time to celebrate though, because I had to go out and finish the remainder of my 22 mile long run for that day. 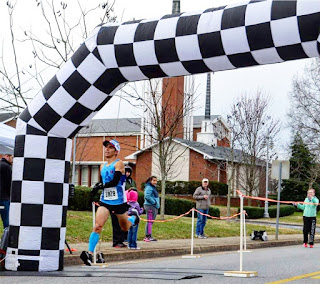 Since these races, I have kept up my training and now I am ready to tackle the Blue Ridge Marathon on April 21... this Saturday! And my lovely bride is doing the half! 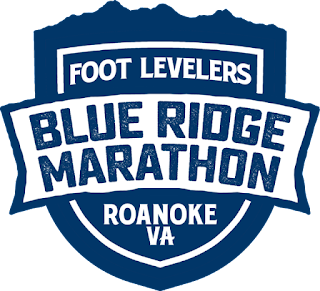