Yesterday, Mr. Marathon and I ran the Martinsville Half Marathon!  It was Mr. Marathon's third time running this race, but it was just my first.  And we had an amazing race!  We both PR'd and placed first in our age groups!  So, instead of just rambling on and on about the race, we have decided to compile a list of 13.1 reasons why the 2013 Martinsville Half Marathon was THE BEST RACE.  EVER.

13.  It was not miserably cold this year.  Unlike both years prior to this one.  It was kinda cold, though, but not too bad as our bodies warmed up after a few miles.

11.  Because we knew what the weather was going to be like, we knew that wearing shorts would make us look like fools.  Sorry to everyone who wore shorts.  Your fault.  We managed to dress appropriately for the moderately chilly temperature.

10.  Mr. Marathon rediscovered his blazing speed by removing three pounds (just kidding!  maybe....) from his head by way of a haircut.  He believes that a haircut doesn't have to be a bad thing.  Especially since it wasn't in his eyes hindering his visibility.  Or poking his eyeballs or dripping with sweat into his eyeballs.  Ew.

9.  We both firmly believe that carrying our own water bottles really contributed to our success in this race.  I like to carry a water bottle when I run, but Mr. Marathon thinks he's a camel or something and generally refuses to.  But he caved, and it benefited him in the long run (get it?  we ran 13.1 miles.  that's kinda long...)

8.  This month, we kicked it into high gear with our training.  Just this month we have run 99.8 and 67.3 miles before the Half Marathon (can you guess which numbers are whose? just kidding don't do that).  Anyway, we decided that it's actually not magic that makes a runner improve.  It's training.  Who woulda thunk it?  It only took Mr. Marathon three years to realize this.

7.  Being familiar with the course also helped us greatly.  Most of our training runs took place on the Dick and Willie and in Uptown Martinsville, along the course of the Half Marathon.  And we did that practice run of the whole course, which totally helped. 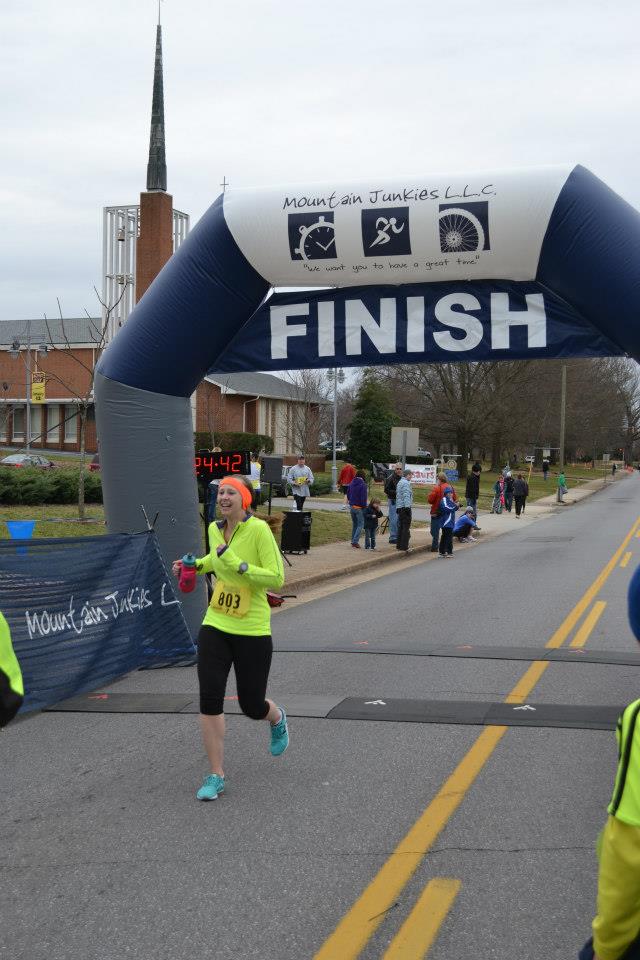 6.  Running the whole course prior to race day helped me set what I thought to be a reasonable goal of finishing in 2:45.  Mr. Marathon's goal was to beat his first year's time of 1:32.  We had these goals nervously set for race day.  And then on the day before the race, we started feeling sick.  What a fabulous time to get sick, right??  We were really worried that we would not perform our best on race day and that we would not meet our goals.  Well, we started out yesterday feeling a little "off," but we both blew it OUT OF THE WATER.  Mr. Marathon could not even look at his watch because he was so nervous that he would see something he didn't wanna see, but he could tell by the fact that there were only four people ahead of him at any given time that he was doing pretty well.  I had like 140 people in front of me at any given time, so I had to use my watch.  But I liked what I saw.  I hit 3 miles in 28 minutes, 4 miles in 38 minutes, and I was flying!  The whole time!!  I realized that when I reached the 11 mile marker at 2 hours even, I WAS ON FIRE.  I was surprising everyone.... including myself.  Mr. Marathon and I were both pleasantly surprised with our final times (1:30:25 and 2:24:43, respectively).  Placing first in our age groups wasn't a bad surprise, either!  Overall, the race was full of surprises!  But only the good kind.  Not like my "surprises" from the Disney Half Marathon.... yikes!

5.  Mr. Marathon realized that being serious is no fun.  He might be a seriously good runner, but he ain't got time to be serious!  Ain't nobody got time for that!  He found out that what continues to drive him to be a better runner is to see other runners having a good time-- smiling, laughing, joking, high-fiving, you know.  And on this out-and-back course, he got the privilege of seeing every single other runner at some point on the course, and he greeted them with a word of encouragement and a smile.  I also had a similar experience. Not only did I run 13.1 miles, but I also smiled 13.1 miles!  I was doing so well from the get-go that I did not stop smiling.  Not even when the uphills were rising up from the ground.... completely unexpectedly (psych!). We decided that a smile can go a long way.... 13.1 miles and beyond!  :)  So if you're a runner, throw a smile out at a fellow runner.  It might just come back to help you, too!

4.  Speaking of smiles, the amazingly friendly volunteers from our community really helped make this race the wonderful experience that it was.  They greeted all the runners with a smile and a cup of water or Gatorade, whether you wanted it or not!  They were eager to help and very motivating.  We don't think we could have done nearly as well without the cheering (and the hydration and GU) provided by the course volunteers and spectators.

3.  We know that organizing an event of any kind can be hectic and difficult, and we frequently have complaints about poorly organized races in particular.  However, the Martinsville Half Marathon is the best organized event we have ever participated in, hands down.  Registration was seamless, the starting line was self-explanatory, the refreshments were readily available and plentiful, and overall, we knew exactly what to do, where to be, and when to be there!  The aforementioned volunteers were also well placed along the course to help guide and assist (and of course cheer for) all participants.

2.  We also love that this is a very small-town kinda race.  We recognized a good majority of the other runners from training runs and other local races.  The Martinsville race scene is growing and expanding, but we all seem to know each other somehow or another!

1.  And last but not least, it's OUR small-town.  We love that Martinsville and Henry County are capable of coming together and putting on such a wonderful, inspiring, motivational event.  It's nice to see something so great come out of our little community.  We hope to be loyal participants/supporters for as long as we can.

Oh, I almost forgot about the .1!  The icing on the cake of all the awesomeness was the t-shirts.  I saw Mr. Marathon's shirt and thought it looked pretty cool, but when I pulled mine out, it was pretty cool too, but it was also WOMEN'S CUT.  Hey, it's the small things that make me happy.  Sorry I'm not sorry!  :)

Today Mr. Marathon and I did a practice run (run... haha, get it?!) of the Martinsville Half Marathon.  Since he has run this race twice already, he knows the course pretty well.  Also, he decided to take a solo practice run earlier this week in some freezing rain.  Totally crazy.  But anyway, today was anything but freezing.  It was 60 degrees and sunny!  Perfect running weather.  So we stocked up on supplies, put on running SHORTS and SHORT SLEEVE SHIRTS and headed out around the busy metropolis (psych!) that is Martinsville.  We had a lovely run.   The weather was beautiful and we had some running snacks (including GU, Jelly Belly Sports Beans, and Honey Stingers Energy Chews) and of course lots of water.  We were both very excited to be out running, however, Mr. Marathon was a bit sore from his 13 miles earlier this week, and as for me, well, I'm just lazy; I have no excuse.  Just kidding.  Kind of.  I did surprisingly well, honestly!  Mr. Marathon's practice run on Tuesday was 1 hour 56 minutes, but he is obviously so much faster than me.  Today our run took 2:57!!!!  That, ladies and gentlemen, is a full 13 minutes shaved off of my time from the Disney Princess Half!  I was hoping for a time under 3 hours; that's all I cared about.  And guess what??? I DID IT!  And there is still two weeks until race day, so there is still a little more time for improvement!  I'm pretty pleased with myself.

Here is a link to my Garmin profile thing if you're at all curious about elevation change of the course, my pacing, etc:
Martinsville Half Marathon Practice Run by ehgarcia at Garmin Connect - Details 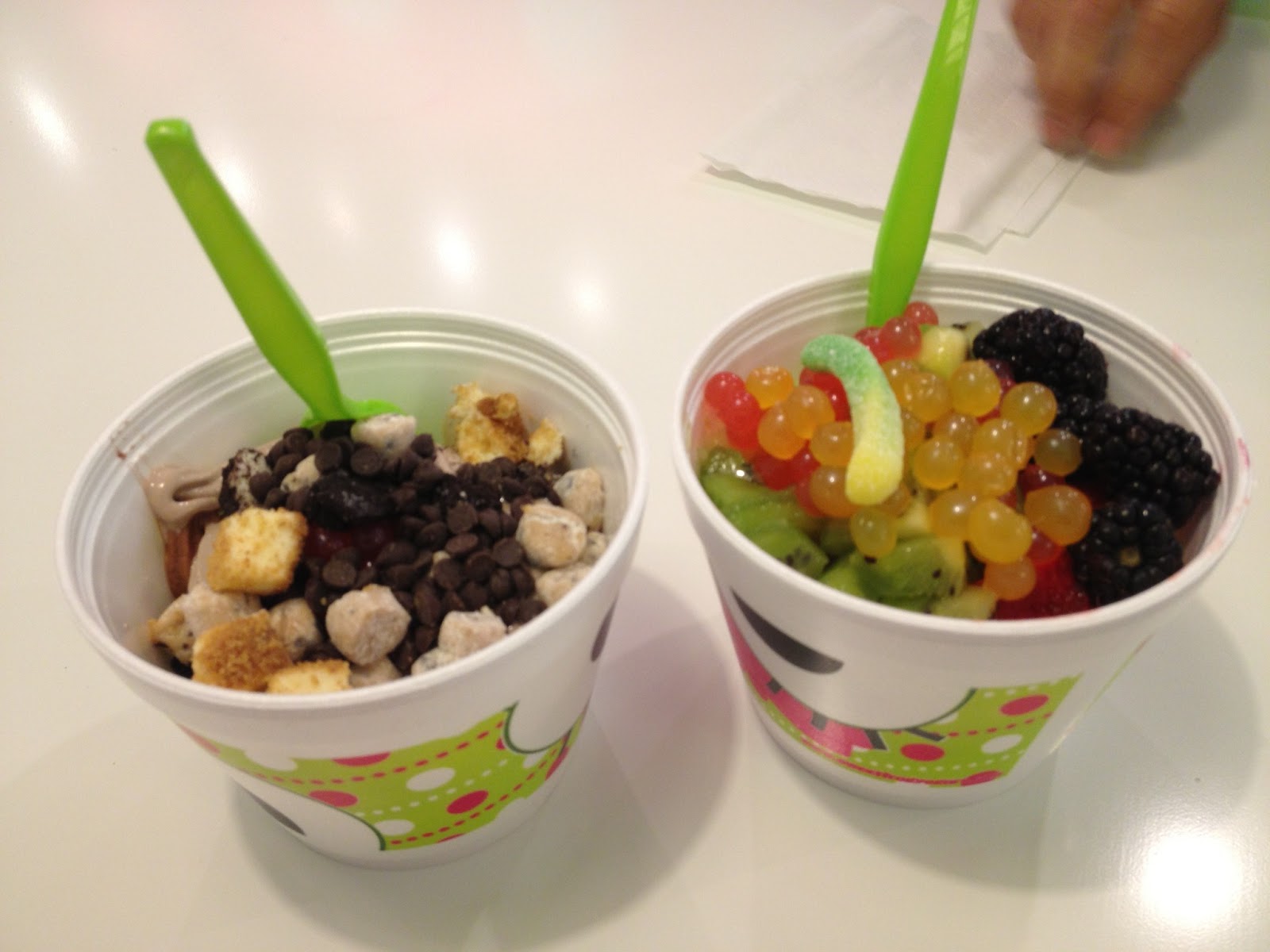 Also, to celebrate our awesomeness, we went to get some FRO YO!!!!  Love me some Sweet Frog.  Can you guess whose yogurt is whose?  Sorry I love chocolate.  Just kidding, I am totally not apologizing for this! :)
Posted by Mr. and Mrs. Marathon at 8:41 PM No comments:

Email ThisBlogThis!Share to TwitterShare to FacebookShare to Pinterest
Labels: 13.1, half marathon, training

Running lately has felt like a real chore.  I have found it to be boring and monotonous, and I really haven't wanted to run at all, between the weather, being busy, being tired, blah blah blah.  So many excuses, I know.  However, today I decided to try something new.  Despite the super chilly temperature and gusty wind, I decided to tackle my usual 6 mile route on the Dick and Willie.  Instead of just running it and being boring, though, I finally downloaded some new songs.  I have pretty much been listening to the same 15-20 songs on my running playlist for like...  a year.  Seriously.  It might not seem like much, but with my new 4 peppy running songs, I felt awesome!  I finished my 6 miles in 1:07:32, which is a completely acceptable time for me. It wasn't a PR or anything, but I felt great doing it!

Also, I figured out how to use my awesome new GPS watch and upload everything online!  Totally cool.  I am kinda unsure about how to post it on here, but I think this link should work.  It shows everything, including my overall pace, pace per mile, elevation change, and other cool stuff.
Dick and Willie 0-3 by ehgarcia at Garmin Connect - Details

So, to sum it up, sometimes new things during a run aren't so bad (as long as it's not a big race or anything, so I've learned).  My new watch and new running jams really helped me out today.  Hopefully I can hold onto this motivation because the Martinsville Half Marathon is in 20 days!
Posted by Mr. and Mrs. Marathon at 8:37 PM No comments: