This is the date that mister and I started this blog. We have been blogging for a little over 3 years. Hard to believe, right?? It's already been 3 years! In our first blog post, we explained the name of our blog: From Bassett to Boston & From Southern Belle to Disney's Belle (now, 13.1 to 26.2). We told you, our lovely dedicated readers, our deepest darkest running secrets-- his: to qualify for the Boston Marathon and hers: to run a half (full) marathon. As you know if you follow the blog or know me at all, you know I have achieved my goal of running both half and full marathons, which in comparison to Mr. Marathon's dream, mine was relatively easy to achieve. Qualifying for the Boston Marathon is the highest standard, the ultimate goal for many marathoners. He made the announcement to the world (uhhh ok, to the blog) that he had the goal to qualify for Boston over 3 years ago, although it has been in the back of his mind since he ran his first marathon in April 2010. Over the course of 5 years a lot has happened, many miles have been logged, injuries have occurred, races have been run, motivation has come and gone and come back again, culminating in one single moment in time. One single race application (yes, for those of you who don't know you have to apply for this race). And one single email response:

From Bassett to Boston: 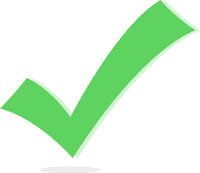 Now, I'll leave you with this song called Boston by Augustana. Although it has literally nothing to do with the Boston Marathon or running at all, I like the part where they go "AND I THINK I'LL GO TO BOOOOOSTOOOOOON" and that's exactly what Mr. Marathon will be (or he better be!) singing between now and April 18, 2016 when he has the privilege to run the most prestigious marathon in the world! And I’ll get to go watch. :)

A couple of weeks ago, we traveled to Williamsburg, VA for the Patriot Triathlon. This race was very well organized  with lots of refereeing going on (which can be a good or bad thing....). There were two distances on Saturday (International and Half Ironman) with a sprint on Sunday. Mr. Marathon decided to up his triathlon mileage and go for the International distance in preparation for the Half Ironman he is doing NEXT MONTH!!!!! Anyway, the International was a good in between distance for him so he can keep on improving. This distance included a 1500 meter (open water!) swim, a 40 km (approx. 24 miles) bike ride, and a 10k run (6.2 miles). Enjoy these photos chronicling the day's events, start to finish!


He really enjoyed this triathlon, and he finished with a time of 2:42:38. He was hoping to finish around 3 hours, so he totally blew his goal outta the water!

As for upcoming events, we have the Myrtle Beach Mini Marathon coming up in October, but also, as I mentioned at the beginning of this post, Mr. Marathon is going to tackle the half iron distance in October as well in Wilmington, NC called PPD Beach 2 Battleship. That's pretty much all we have lined up for now, besides the never ending training!
Posted by Mr. and Mrs. Marathon at 6:17 PM No comments:

Email ThisBlogThis!Share to TwitterShare to FacebookShare to Pinterest
Labels: triathlon


Hello, everybody. We (I) haven't been blogging lately for a multitude of reasons. First of all, we haven't been racing a lot due to our summer slump because it's been hot and muggy and storming and ew, which makes it hard to stay motivated and keep going consistently. Second of all, we haven't done had many races to do because it's summer and therefore NOT race season, thus contributing to the summer slump. Finally, for the past two weeks, I have been in the midst of a personal struggle. If you follow me on Facebook or Instagram or know me at all in person, you know that I lost a close friend two and a half weeks ago, which has been very difficult to cope with. I have been in an even bigger slump, not just in running, but in all aspects of my life. I have been slowly stumbling back to my feeble attempt at being normal. So, in that regard, I'm going to do some catch-up here on the blog. Here we go! But first, enjoy these then and now pictures of me and my bff since second grade who I will always remember fondly, while doing a random smile.... 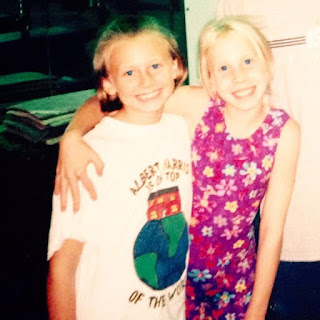 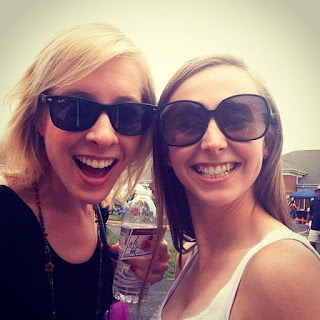 Ok so, the main thing that I haven't talked about on the blog that I feel like I need to is that Mr. Marathon is going for the Spartan Trifecta, which means he has to complete a sprint, super, and beast, which are varying distances of Spartan races, within a calendar year.

Back in April, he completed the Charlotte Spartan Sprint, which we never blogged about (shame, shame, I know). He ran it with a friend, and had tons of fun. Here are some pictures!

Last month, on August 22, we traveled to beautiful Wintergreen, VA for the Virginia Spartan Super race. It was a fun day, good weather, and a challenging course. I say it was a fun day for me because I didn't do it and I got to ride the ski lift up and down the mountain. Yes, I said mountain. For those of you who don't know, Wintergreen is a ski resort. Which means the entire course was on an actual mountain. Turns out, this is the reason that the Virginia Super is like, the hardest one. Leave it to hubbs to find the hardest one to do. Anyway, he and  his friend who did the Charlotte Sprint with him came to do the Super and brought his brother along. Here are some pictures!

Yesterday, he participated in the Patriot Triathlon which I will blog about soon. As for upcoming events, Mr. Marathon is currently running cross country for his college, Averett University, so they have meets until about November, and we will both be participating in the Myrtle Beach Mini Marathon in October.We have some exciting stuff coming up, so hopefully I'll actually blog about it and not fail miserably...!
Posted by Mr. and Mrs. Marathon at 2:53 PM No comments: