Blue Ridge Marathon and Half 2018

OMG YOU GUYS WE ARE TERRIBLE. Or we have just been really really freakishly busy for the past month. Back in April on the 21st (so legit over a month ago) we participated in the Blue Ridge Marathon and Half Marathon and WE NEVER BLOGGED ABOUT IT. Life has been cray cray and mad-stupid busy and if we weren't actually busy, we were busy recovering from the busy-ness. Anyway, here we go-- RECAP TIME.

We ventured north to Roanoke, VA for the expo Friday night to pick up packets. The expo has moved around a few times, and this year it was in the Patrick Henry Hotel ballroom area and it was very nice! It was a perfect area for it, and there was plenty of room for vendors around as well. We are always impressed that each year the expo seems to grow and improve.

Saturday morning we traveled back to Roanoke, since it's only an hour away, just in time for the races to begin bright and early. The half and full marathons (and the 10K) start at 7:35 AM. We took off, and all races stay on the same course til they split a couple of miles in. Of course, I didn't see Alfredo as he started way ahead of me and kept getting further ahead, but I knew where he was vaguely at least. Since the courses split a little ways in, this blog post will split at this point as well.

Alfredo here. I was really excited about this year's race. I threw myself all-in to my training since January 1 of this year. I used my cross country season last fall as a base building period, and then starting in the new year, I began my Blue Ridge specific training plan. I wasn't sure how my long distance paces would be, and I had the Martinsville Half Marathon built in as a checkpoint race back in March. I was blown away by those results, so it was a great confidence booster leading up to BRM race day which was a month later at that point. 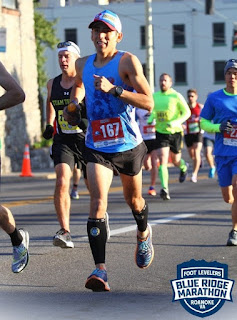 I had a BRM personal course record of 3:07:47 that I really wanted to beat. Another goal I had was to hit a Boston Qualifying time on the course, which would be sub 3:05. Even though this race isn't an official Boston Qualifying course, I still wanted to attempt it to know if I could do it on such a tough course! But of course, my main goal, like in all my races, is to finish what I started. Also, I have a BRM streak going still. I have run it ever year since its inaugural running back in 2010, so I had to keep the streak alive! 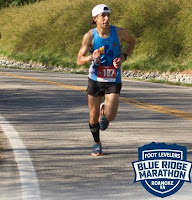 Over the years, I've realized that I can't run anyone else's race, and I just have to run my own race. That's exactly what I did this year at the BRM. I know that pacing for this race is very difficult, and you can't just set a certain pace and stick to it. One minute, you could be running an 8 minute mile, and then you hit a down hill (mountain?) and you could be able to hit a 5 minute mile. From the time they fired the starting cannon, I had this thought front and center in my mind: RUN YOUR OWN RACE. So as people were taking off, passing me right from the start going up Mill Mountain, they were running THEIR own race just as I had to run mine. As time passed by, we bypassed Mill Mountain (that's where we split from the other runners) and marathoners headed up their first mountain: Roanoke Mountain. It was smooth sailing, and everything felt great. We went up, then my fun began going back down the mountain. That's something I look forward to ever year. I always am able to hit some of my fastest paces going down the mountains in the BRM! But then, the fun is over pretty quick after coming down Roanoke Mountain, because then we get back on Mill Mountain and get to go up it to the Roanoke Star. I'm always thankful when I make it up to one of these peaks. I feel like I'm on top of the world! But then I get to come back down again, so that's fun too. 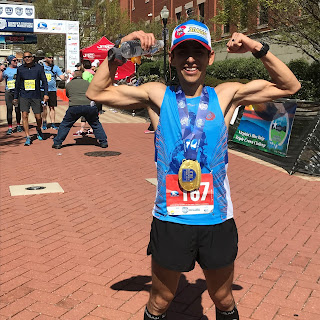 Unfortunately this year, coming down Mill Mountain, I started experiencing some hip and knee pain. I had been battling some pain and soreness in these areas for the last couple of weeks of training, and everyone kept telling me they were more than likely just “phantom pains,” but I still tried to rest them in case it was something more serious since I was in taper anyway. But I'd come to realize at this point that they were probably not phantom pains, and they were pretty real. Despite the pain, I knew I was going to finish strong. I figured I'd already made it halfway, so even if I was suffering, I was going to keep on trucking! Fortunately I was able alter my gait a little for some relief on the uphills and the straightaways. However, my fun parts trucking down the hills were no longer fun since they were causing the shooting pains in my legs. This also made me realize that it may be time to upgrade my racing shoes. Unfortunately this thought came too late so I just had to suck it up and learn from my mistake (and order new shoes ASAP!). This hurt my time coming back down the final mountain: Peakwood. Coming up Peakwood is always challenging, but I usually make up for lost time going back down, but not this year. I saw the 3rd place overall guy coming back down as I was going up, so he was probably about a minute ahead of me at this point. We both waved, said our “good job/good luck/keep it up” words of encouragement, and he kept going down Peakwood, and I kept on climbing. The nice part about this course is that the marathoners get to run alongside the half marathoners for most of their course. The marathoners just split in the beginning to up Roanoke Mountain, and then at the end at mile 22 to add 4.2 lonely miles to their course. I always enjoy running with other people, so the little extra 4.2 miles can be a real bummer. It is kind of easy to fall behind without the added motivation of spectators and other runners. That's when you really have to get in touch with your own motivation and DIG DEEP. I'm sure this is just from my point of view since I had no one around since the other marathoners hadn't come through yet either. But I made it through and managed to stay steady. In the last 3 tenths of a mile, I climbed the last little slope and took off on the last downhill to the finish and gave it all I had til the end. With a time of 3:07:12, I walked away with a new BRM course record for myself, a BALLIN' finisher's medal, as well as fourth place overall/first place age group placing. I did, however, fall a bit short of my BQ goal though. All in all, the day was painful yet successful I would say. And the BRM 26.2 streak continues! And I'm already signed up for 2019...... Am I stupid? Am I crazy? Nah, I just got a 50% off code for completing the post-race survey, so I'm just savvy! 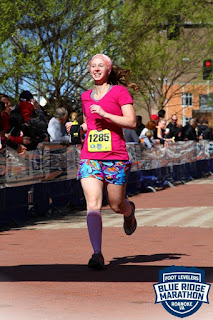 Elizabeth here now, taking back over. I was so impressed with myself that I ran the first 3ish miles of this year's course, which included the beginning of the ascent up Mill Mountain. Last year, I only made it a mile and a half before I had to walk. It wasn't a sprint by any means, but I kept on chugging along. I took a brief break at mile 3ish then I took off down Mill Mountain. I relished in the little flat-ish section in between the 2 mountains and I got my pace back down and kept it there. Then once I went through the tunnel at the River's Edge Sports Complex, I knew I'd be heading up the neighborhood hills before entering PEAKWOOD: THE SECOND MOUNTAIN! Those neighborhood hills are really draining, considering you have to do some rolling hills before you go up the final mountain, then you have to go through them again once you come down Peakwood. But this year, I was pacing pretty well. Last year I completed the course in 2:38:19. I had the goal in the back of my mind to at least beat last year's time, but I also wanted to break 2:30. I knew that would be a stretch for me on such a tough course, but I ran beside the 2:30 pacer for a little ways up Peakwood, but then she had to leave me. I was crushed. Devastated. And I wanted to give up. But I knew I would still have to go back down Peakwood. I definitely regained some time going back down, and lo and behold, I caught back up to the pacer at around mile 12. And then I passed her. And I finished in 2:28:28! Goals met!

NOW: Other random pictures from race day to tide you over until we do our blog post recap of the Georgia Peach Jam Half Marathon  that we did on May 28 (Memorial Day). We'll get around to it... eventually....