Well I had the goal of getting this post out before the end of November. Clearly seeing as the date is December 3, I have failed. Regardless, here is our recap of our Thanksgiving runS (yes we did 2!) for this year. 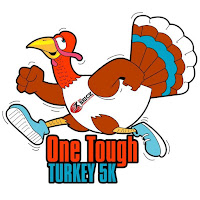 First on November 18, we did the One Tough Turkey 5K in Danville, VA. This small, low-key run was held at Angler's Park, which is a place that both Alfredo and I run fairly regularly, but the route for the race is all of the hills in that one little area all at once. Hence, the TOUGH turkey. The concept of the race is interesting, too. It had no shirts, finisher awards, or entry fee. All that was required is that you donate a can of food to participate! I didn't feel ready for this just a few short days after the Outer Banks Marathon, but hey, a free 5K? Gotta do it! And to make it even better, the running store where Alfredo works was hosting the race. So of course, I ended up doing it. Even though I knew those hills would get me.

The run started at 8:00 am, then after just a short distance, the course began up a hill. A huge hill. One that I feel like even my car struggles up. (Ok so possibly some over-dramatization. Maybe.) But regardless, the whole first half was straight up it seemed. The second half was rolling hills (rolling mountains?), which was kind of confusing. I was wondering how we went straight up hill the first half, and in the second half we had some downhill, but there was also some uphill left? Even though it was run on a loop and we were ending up exactly where we started? Whatever, it will never make sense to me, even though I have examined the elevation map. WHATEVER. Moving on, Alfredo ended up winning with a time of 18:46, and I met my goal of running the whole thing, which may seem like I set the bar kind of low, but I knew those hills would make me really want to walk. I ended up doing that and exceeding my expected finish time of 33 minutes, and I managed to surprise myself and break 30 minutes with a time of 29:56 (unofficial). And it was all for a good cause-- feeding those who need it during the holiday season!


The second Thanksgiving run we did was in Georgia while visiting my family. We found the Gobble Wobble 5K in Auburn, GA. This one was on Thanksgiving Day, November 23. This run was only 20 minutes or so from where we were staying with family, so we didn't even have to get up super early for the 8:00 start time! We got up, ate breakfast, and were on our way. First of all, I checked the weather forecast while we were still home in Virginia, and it was saying high 40s/low 50s that morning so I packed a couple different options in case the weather changed. I packed short sleeves, long sleeves, shorts, and capris. I felt like between these articles of clothing I would be able to dress myself for a Southern, late-fall morning. I WAS WRONG. It was only 43 degrees, which doesn't sound like that much of a drastic difference, but it was very cloudy. I opted for the long sleeves and capris, and I bout near froze! Usually my fingers regain feeling after a mile or so, but fingers stayed frozen until I went to go get my big fuzzy jacket from the car!!!

Anyway, Alfredo ran this one too. He started at the front of the pack to take off on this unknown course ahead of us. The race was held in Little Mulberry Park, which was a cute little park with a paved walking trail that went up through the woods and around a pond and a lake. It was surprisingly hilly, but nothing we couldn't handle. We went up, we came down, we went up, we came down, etc etc, and we went around the various loops of the park. Alfredo came in a solid 3rd place overall with a time of 18:32. Unfortunately, this race only recognized 1st place overall, then 3 deep in age groups, so he ended up placing 1st in the 25-29 age group, which is almost better??? Great time regardless!

I ended up finishing (frozen solid) with a time of 28:04. I was pretty surprised by that time, as I was expecting closer to 29 minutes since I was still recovering from the marathon and I was recovering from a particularly hard few days at work. Would it have been nice to finish in under 28 minutes? Yeah, but I was still happy with what I was able to do! Also, I came in 5th place in my age group out of 29 people, so I was near the top! So even though I didn't place, I am still happy with that.


Then we got to go to see my family and eat tons of delicious food at our Thanksgiving lunch! So what a great day it was, indeed!