This year was Mr. Marathon's 6th time running the Blue Ridge Marathon-- America's Toughest Road Marathon! (Read about previous years' races: 2014 and 2013) This year, he decided to tackle his training for this marathon head-on. He took his long runs, he did his speed work, and he even took a training run on a couple of the mountains that are part of the marathon course. He still thinks he could have trained a lot harder or better, but considering this is the marathon that he keeps signing up for year after year, he'll take what we can get on it.

First of all, one thing that he felt helped him a lot was his practice run. A couple of weekends ago, he decided to go up to Roanoke to train on the course. Despite it being cold and windy, he took off from the River's Edge Complex in downtown Roanoke, heading up the Greenway towards the Parkway. His first mountain was Roanoke Mountain, which is about a 4 mile loop literally up and down a MOUNTAIN. Then right after that, he headed straight to Mill Mountain, home of the famous Roanoke Star. Then, he headed back down Mill Mountain and finished up on the Greenway. It seems like it would be short and simple, but it was a total of 15 miles with some serious elevation changes. It ended up taking him 2 hours and a few minutes, which he was very happy with, but it also made him realize that he should have been training hard on tougher courses throughout his training. 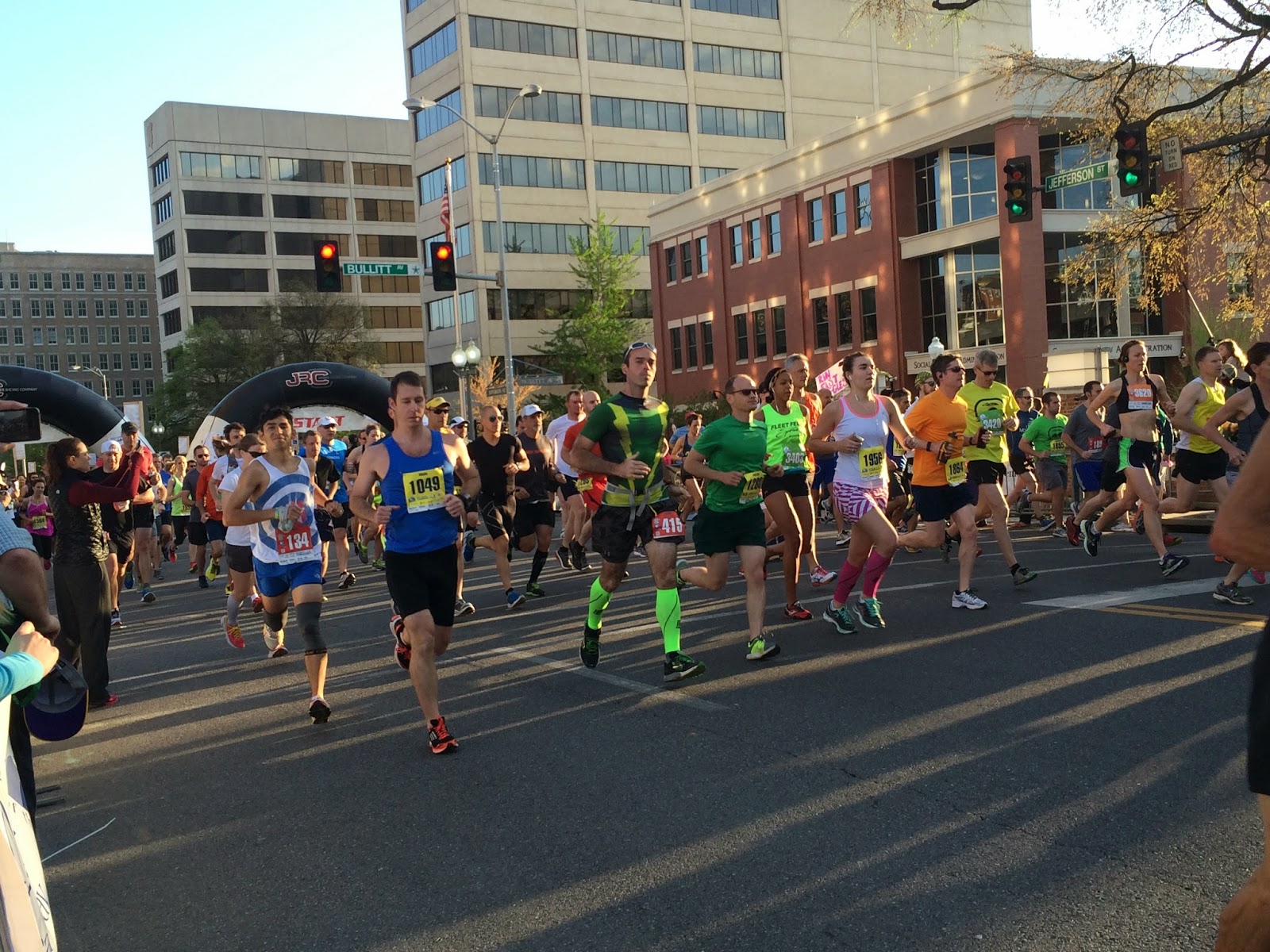 Fast forward two weeks from the training run. Race day is upon us! As we woke up at the crack of dawn (or just 5:00 AM like I always do), we had a goal to leave our house at 6 to make it there in time to get in line for porta-potties. And of course, like warm-up and stuff. But mostly porta-potties. After standing in line for a significant amount of time, it was T-10 minutes to race time. As the countdown began, it was ready or not, here we go! Runners for all three races (half, full, and 10K) were off from the mass start (and I went to get breakfast...). Mr. Marathon as he was beginning to climb up towards the Parkway, he was at 3 miles in 23 minutes, and as he was approaching Roanoke Mountain, he was trying to come up with a strategy, which ultimately ended up being slowing down on the uphills, taking off on the downhills, and maintaining a steady pace on any straightaways, or as straightaway as it can be on the BLUE RIDGE PARKWAY. He made it to 9 miles at 1:09, and by that point, he was headed towards Mill Mountain. This was still area that he had covered on his practice run, so he was pretty comfortable with it, and it made it fly by! By the half marathon split, it was 1:40, and he was still going strong, or at least pretending to. He still felt great, and kept trying to be confident that he would meet his modest goal of breaking 4 hours. 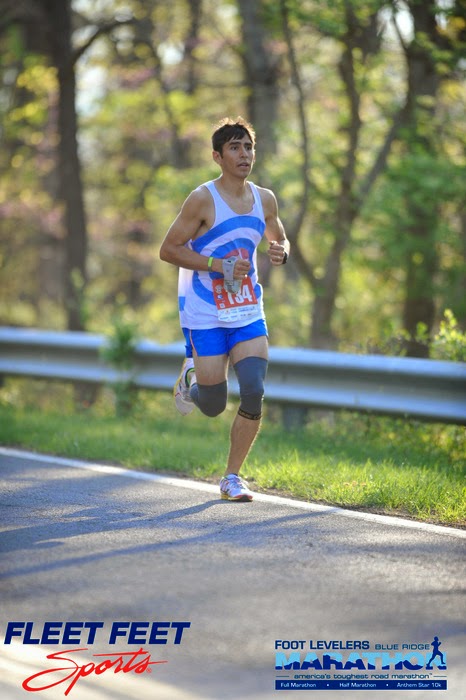 As he started heading to the third and final mountain, he really became more and more motivated. This is because the third mountain goes through residential areas and a lot of local residents are out, cheering on runners, passing out sustenance, or even offering an alcoholic boost! He only accepted the first two though. Peakwood, affectionately known as Pukewood, is the most infamous mountain on the course. At this point, you are most likely starting to wear down, and you're not able to push yourself as much as you want. At this point, your body begins to control you. But nevertheless, he kept trucking on and pushing up the mountain. 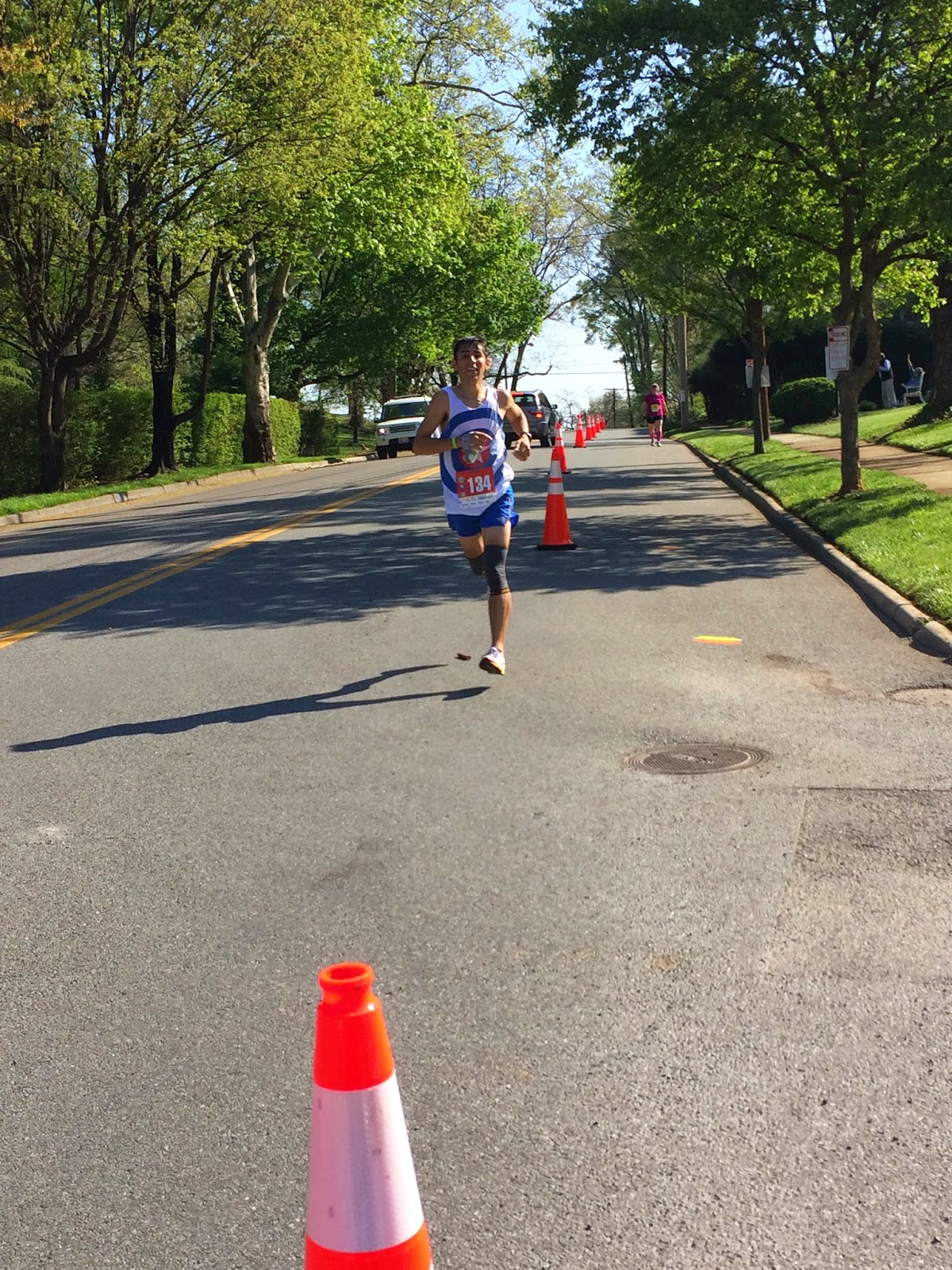 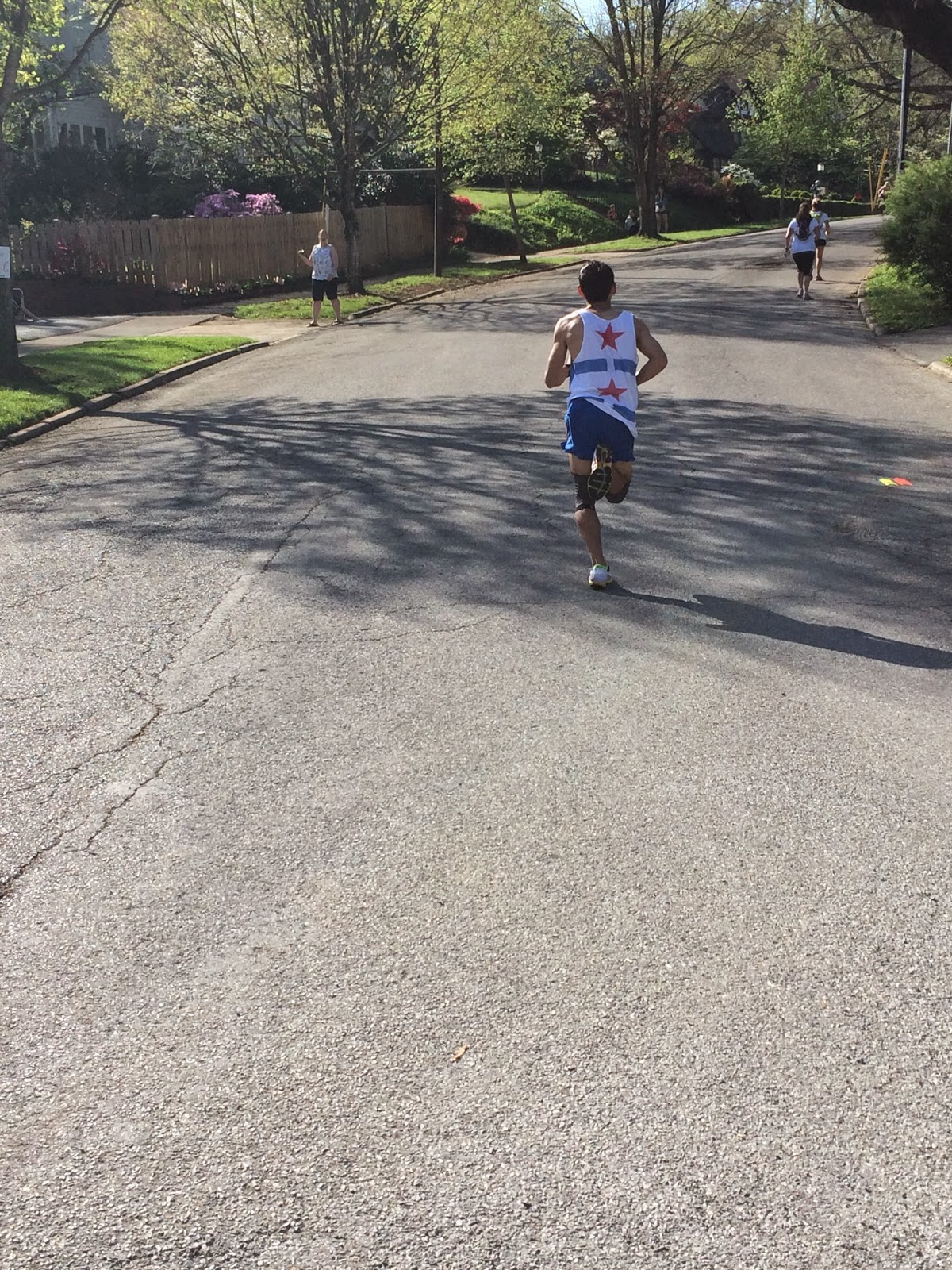 One thing that he talks about that kept him motivated was not necessarily passing the half marathoners, but the way they treated him as he ran by. They made him feel important and like he was a big deal. They would say, "Marathoner coming! Move over! Let him by!" and he would tell them, "You don't have to do that. I can go around. This is your race too, and you're all doing awesome!" This was not said to him just once or twice, but multiple times, as if he was passing the same person with the same great attitude, when in reality, this mentality was shared by a good majority of the runners in this small-town race. He couldn't believe the great attitude they had, despite being passed by a marathoner, they still had it in them to motivate one another, and even the guy that's passing them. He appreciates this because this is what he likes to do himself. He likes to pass on the positivity to fellow participants, and he loves it when the favor is returned. 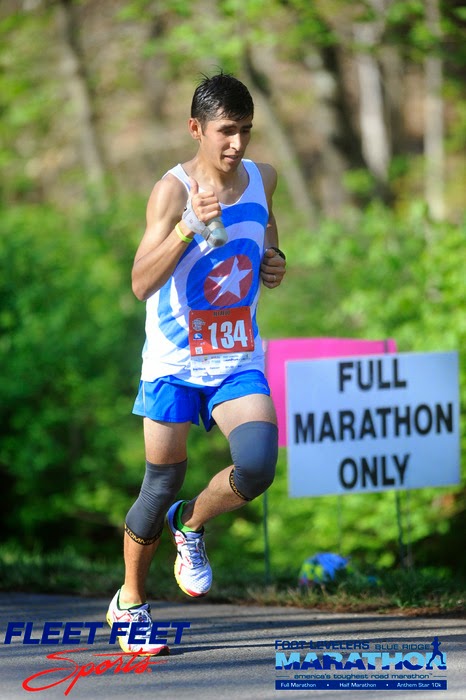 Once he got up to Peakwood, he reached the peak of Peakwood (redundant right???) and felt a huge relief during his descent. But he knew he still had a few small hills to overcome. He says it was funny the way his mentality was working at this point because he began to change his plan of attack. Now it was power-walk up the hills and try to run everything else. The first hill he had to power-walk was at the 20 mile marker, which by the time he got it, he saw a sign that said "WHAT WALL?" And he was like, "Really???????????????????? What wall? WHAT WALL? THIS! THIS WALL!!!!!!!!!!!!!!!" They honestly couldn't have placed that sign at a better point in the race for him. He was really beginning to hit his wall, but he didn't officially "hit the wall" until about mile 23, at which point, he really had to slow down and walk most of the time, and run only whenever he had enough energy to do so. It didn't help that by this time of day, the sun began really beating down, and it was about 75 degrees, which seems like a beautiful day most normal people, but it is a scorching day while you're trying to run a marathon! It was tough to try to stay cool and finish strong, but finish strong he did. When he turned the last corner and saw the downhill finishing chute, he took off and gave it all he had, or what he had left anyway.

As he finished, people were telling him that he was only the 11th marathoner to finish, but at this point, he was looking for me and ice, not necessarily in that order. He dunked himself in the ice that was intended to cool off beverages, not a sweaty marathoner, but hey, sweaty marathoners gotta do what they gotta do! So he did. My personal favorite moment from that day was when he just looked at me after rolling around in the ice tubs and said deliriously, "Do you ever have that moment when you just have to shove ice down your pants???" Um, no, babe. But uh, you do what you want... And so he proceeded to do just that, but I'll spare you additional details. However, he decided that a kiddie pool that had a sign that read, "FEET WELCOME" he decided that this was discrimination to butts and decided to fight the man on this one and plop down into it and roll around.

After cooling off finally, he laid down in the shade on a blanket in the grass and did not move. He rested for a while, then proceeded to drink 3 Vanilla Cokes and eat some pizza and oranges. That was only the snack before lunch/dinner at Steak N Shake!

Stay tuned as we approach our triathlon season and ramp up our training for some upcoming goals of ours...!