Today was a beautiful day for a comeback run.  I was hoping to run the Harvest Moon 10K that is in less than two weeks.  But since I have been in such a slump, I didn't think I would be able to make it the 6 miles.  However today, I proved myself wrong.  Mr. Marathon and I woke up and hit the trail and ran the course of the Harvest Moon Run and I did it.  I completed the course.  In time that was only 2 minutes longer than my race time last year, as well.  I was so proud that I could run the 6 miles, let alone in good time.  I was telling myself that if I could finish it, I was doing okay.  But I felt like myself again running that distance.  My feet hurt a little and I was kinda achy and really really really itchy, but I didn't care.

So I'm gonna get me a registration form for the Harvest Moon 10K and kick my hiney into gear.  I will be doing hopefully one more run of the course between now and September 6 (race day!), as well as other shorter runs and some speed training.  Also, I will be closely watching my diet (fruits and protein will be my focus), and doing some Insanity (remember when we used to do that? heh....) and hopefully it will all pay off on race day.

Also, we will be using the Harvest Moon as a warm up run to the fall 2013 season of our running.  Upcoming races include:

Email ThisBlogThis!Share to TwitterShare to FacebookShare to Pinterest
Labels: motivation

Last week, Mr. Marathon abandoned his normal road running for a new, more challenging terrain.  He registered for the Helgramite Hustle Mud Run that is held at the Smith River Sports Complex in conjunction with the Smith River Fest.  Oh, and he signed up for it on a whim.  He just thought to himself, "Oh!  This sounds delightfully fun!" and just went for it.  Little did he know what we was in for.  He says that running in the mud and completing all of the obstacles was very challenging.  He says he was SO TIRED during the run.  He says that he felt like he was slowing down.  Well I say WHATEVER.  I was watching him and did not see any of this.

First of all, there was a big mud puddle to start out the race.  He "accidentally" ran around it.  He tippy toed around the puddle and then took off while others were wading through the mud and water. Then, he was off.  I decided to spectate only, and so I went across the festival to about mile 1.5 or so, where he would be running through shortly.  I was poised and ready with my camera.  We heard people splashing down the creek, and there he was, coming in first, speeding around the curve and I saw him climb up the rope out of the creek and he was gone.  So, I ran back to the starting line (also the finish line) and waited.  And waited.  It was so hot, and I was in suspense.  The finish line was on the other side of a field that the runners would be coming through.  They were going to pop out of the woods and then run through the field so I was watching the woods for a muddy Mr. Marathon.  I continued to wait, and then I saw a lone runner emerge.  I was so excited!  I couldn't tell if it was him at first, but then I realized that he was prancing, umm, I mean, running, in his usual style.  He was the first one, by a long shot.  He came running through the field over and through the final two obstacles with time for a quick dip in the puddle before victoriously crossing the finish line with a time of 22:45!

After he finished and  soaked up all the glory (and mud), the Axton Fire Department hosed him off so he could be camera-ready for an interview with a local news station.  After his interview, he went for a swim in the Smith River to cool off.  SO PROUD!  Even though he was muddy for days.... oh well! 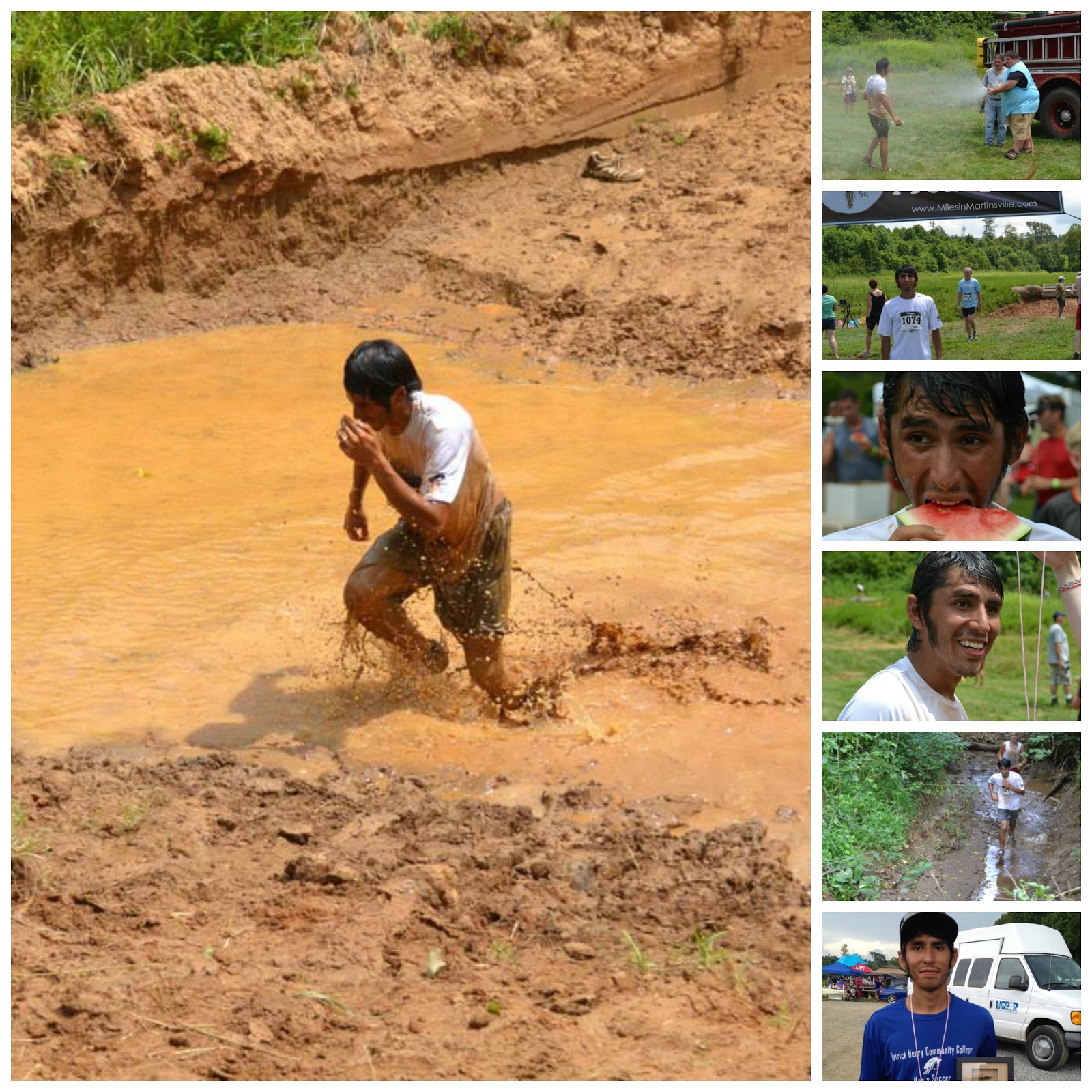 Ahh, embarrassment: an emotion most of us know all too well.  Embarrassment is also the reason for the delay in this blog post.  I haven't posted in months for a multitude of reasons and excuses, but I know that you don't care.  So I'll skip all that and get right to the point.  I get embarrassed.  A lot.  And currently I am embarrassed because I have hardly been running this summer.  I keep telling myself I need to kick it into gear before the school year starts (I'm starting my FIRST YEAR as a third grade teacher... SO EXCITED!!), but somehow, I just can't find the motivation to just run.  I have taken a few 3-milers and quick 1 mile loops around my neighborhood, but past that, I can't seem to find it in me to really get back to my training.  Mr. Marathon has been biking
and playing soccer and staying active other ways, and he recently started running a little more.  So he's at least better off than me.  We are both (supposedly) training for a few upcoming events, including (but certainly not limited to): the Danville Half Marathon, Richmond Marathon/Half (respectively), and the Star City Half Marathon.

I bought new running shoes in hopes that I would become a little more motivated.... let's see if it works.  I've run a grand total of 4 miles in them in the past two weeks.  HAH.


So now I know I have some loyal readers out there.  I have a favor to ask of you: either comment here, on Facebook, or email me your mantras for when times get tough.  I need a little extra motivation to overcome my embarrassment.  Can't wait to hear from you!