Yesterday was a big day for me! I had set a goal at the beginning of this year to update some of my current personal records, the 8K being one of them. I haven't really run many 8Ks, so I hadn't set a PR in that distance since 2012 when I ran the HCVa 8K in 51:54. I really wanted to run another to see how much I'd improved since then.

So I decided to run the Super Run 8K in my little hometown. This race is just wonderful! It's the celebration event for the end of the spring season of the Girls on the Run and STRIDE running teams from local elementary and middle schools, and since I am a Girls on the Run coach this race was extra special to me. I had 4 girls running the 5K, and spoiler alert: they totally rocked it!!!!!!!!!!


After we all gathered and took some pictures first thing in the morning, we all made our way to the start line. I took off a little bit too fast (I got excited sorry!) and I finished the first mile about 30 seconds too fast for my goal pace. My goal was to just PR, but of course I wanted to see just how fast I could go. I found my groove for the next couple of miles, despite some hills. I have run this course a few times before so I knew about these hills, so it was no surprise. However, the last time I had run this course, I got a stomach cramp around mile 3.5. I blamed it on my nutrition that day, so I was hoping on race day if I ate my usual breakfast I wouldn't experience any cramping. Unfortunately, I began cramping around that same time. I ran through it and kept pushing because as I approached the turnaround I got to see all the other runners coming back. I noticed the first several men, then I saw one woman, then I got to the turnaround, and I hadn't seen any other women. Granted, there was a small turnout for the 8K as the 5K is the main distance for this event, but still, I was 2nd place female! I saw another woman a little bit behind me, so I knew despite my cramping, I had to keep pushing to maintain my spot! 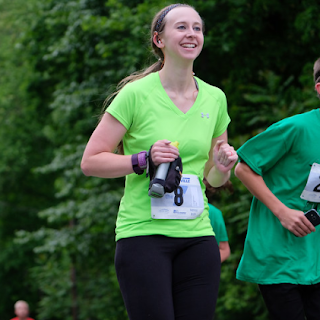 I pushed through to mile 4, then I made my way back to the last road before the final turn toward the finish. My cramp was coming and going, but the woman who was behind me still hadn't caught up. I kicked it up at the end around the last turn. I ran the last straightaway to the finish line without even looking down at my watch. I was expecting a PR at this point, however I was not prepared for what I saw: a time of 46:29! It was a PR of 5 minutes and 25 seconds!!!!!!! I would have been thrilled just with this time, but it made it even better that I managed to place 2nd overall female.


Now, it's time to get sappy. I haven't raced short distance in a while, but I am just so happy with my time and the effort I was able to put forth during this race. If you recall, I got sick back in November with pneumonia that put me down and out for quite a few weeks. Then I got sick again in February after just coming back to running after the pneumonia and I was out for a few more weeks. I was so nervous that I had lost all my fitness, endurance, and speed. But I ran so much during March and April training for my half marathons (RnR Ral and BRM), and luckily for me, it brought my speed back to where it was (and then some)!  As for what's next, I have a few more goals that I would like to accomplish coming up here soon, including a goal for a 5K and a 10 miler!!!