Blue Ridge Marathon and Half 2017

Last Saturday, we had another his and hers race extravaganza! Mr. Marathon has been tackling the Blue Ridge Marathon- America's Toughest Road Marathon since 2010! Read about years past here and here and here and here and here. Last year, I decided to join him and do the 10K. Last year, we received entries as we were official BRM bloggers. I jokingly said if we got entries again this year I would bump up and do the half. LOL right? Well, SOMEONE entered us in the "Running is for Lovers" contest, with the prize being two free entries to any of the BRM races. He entered our adorable picture from crossing the finish line together at the Ft. Lauderdale Marathon. So obvs we won. And so I had to bump up to the half this year!

We went to packet pick up the night before on Friday, then ate our pre-race pasta. On race morning, we headed to Roanoke, VA to RUN THOSE MOUNTAINS! All 3 distances (10K, half, and full) took off at 7:35. So now, because this was a his and hers race extravaganza, we will have a his and hers recap. 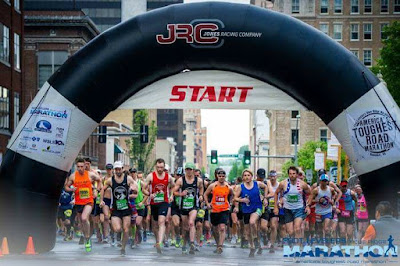 HERS
I went into this race with not a whole lot of expectations. This half is part of America's Toughest Road Races series, and it boasts 1,897 ft total elevation gain and 3,790 ft of total elevation gain/loss. I had told myself a few months ago when I found out we had won entries that I would incorporate hill repeats into my training, but yeah, that never happened.... yikes! So because I hadn't gotten much hill training, I really didn't have high expectations. I just wanted to be able to finish the half before my mister finished the full. Anyway, the first part of the course goes through downtown Roanoke and it only has some rolling hills for the first mile or so. Then, I started the ascent up Mill Mountain. This part of the course is the same as I did last year at the 10K, so (fortunately/unfortunately) I knew what to expect. The climb up Mill Mountain was tough last year, but what made me the most nervous was that people kept telling me the second half of the half marathon (Peakwood) was tougher than Mill Mountain. So I tried to keep some gas in the tank going up and coming back down Mill Mountain.

Turns out, everyone was right about Peakwood being worse than the first half. Even though the elevation gain is more drastic up Mill Mountain, Peakwood is a more gradual kind of torture. And it faked me out a couple of times. We climbed, climbed, climbed, and then we would go downhill for a hot second, then climb some more! And to make matters even better, it started raining pretty steadily at around mile 8 for me, which was almost at the top of Peakwood. At the turnaround at the top of Peakwood, I was so relieved to have some more downhill. After enjoying a few miles of downhill, there was more uphill and I was thinking WHAT IN THE WORLD IS THIS MESS. But nevertheless I did the darn thing. The little overpass bridges in downtown Roanoke that seemed like nothing in the beginning seemed steeper than Peakwood coming back in. But I finished in 2:38:19, which was before Mr. Marathon finished his full. GOAL MET! 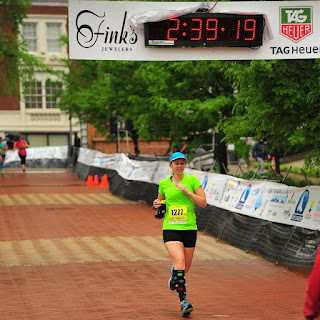 HIS
As mentioned earlier in this post, Mr. Marathon has run this race every year since 2010, which is its inaugural year. He loves it so much (lol?) that he keeps coming back for more. He knows the course like the back of his hand, but each year and each race are drastically different, this year being no exception. Last year, he ran Blue Ridge on a Saturday, then 2 days later on that following Monday, he ran the Boston Marathon. This year, he ran the Boston Marathon on Monday and Blue Ridge was 5 days later on the following Saturday. So this year, he was drained from a tough race at Boston, but was still looking forward to his favorite race. 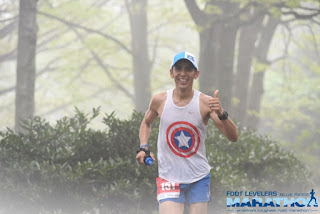 This year he decided to tackle BRM with one goal in mind: to finish it to continue his streak. This race isn't like any other race for him. And no, it's not because it's America's Toughest Road Marathon (which it is if you recall), but instead it's because this race is the race that started everything for him. This race holds a special spot in his heart. He took off like every other year at the front of the pack, however he knew his limitations. He knew in order to survive it, he was going to have to change his game plan from previous years. In years past it's been his goal to run without stopping. But this year he was planning to fartlek (run to a certain point and then walk for a bit to recover) up any major hills. He started this about 4 miles in. Sometimes we forget that we are our biggest competition and in a race, when someone passes you, we can't help but to chase them down and pass them as they passed us. But not that day. As he walked up the hills, people passed him, and just like any other race, he cheered them on as they passed him, but he refrained from attempting to chase them down. Now with this plan in place, he would take full advantage of all downhills to balance out his walking up the hills. And mile after mile, he did this, evaluating every step of the way. Nevertheless, he was cracking jokes and keeping a great sense of humor throughout the race like he always does! 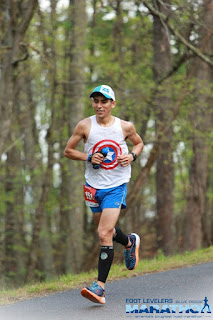 However, this didn't mean that he wasn't going to push himself.  Closer to mile 22, things began to hit hard. But he stayed with it, continuing his fartleking. He also found some extra motivation in a new friend he met along the way. This individual began his final leg of the relay as Mr. Marathon was side by side with him. This guy said "Don't you worry about me, I'm just doing the relay," and he made him realize that he was putting in effort, and it was nice to have a complete stranger recognize and acknowledge that. They ran together until one of the last major downhills that was very wet from the rain, so the other guy was a little bit more cautious and careful. But Mr. Marathon was not. He just let it rip down the hills to try to carry him the last mile and a half. With one mile to go, he said "Thank you" to a police officer who was at an intersection directing traffic and the officer said, "Not a problem, just focus on the race." And yet again, that made him realize that other people were recognizing his effort. So for the last mile, he carried this feeling with him and was able to finish strong. Another BRM in the books with a time of 3:31:02! 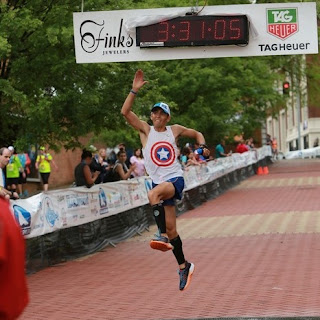 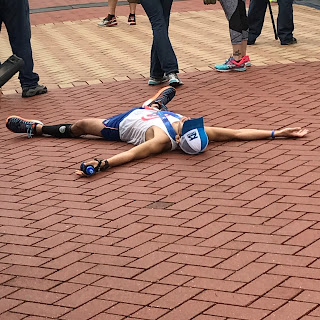 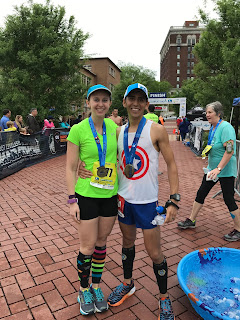 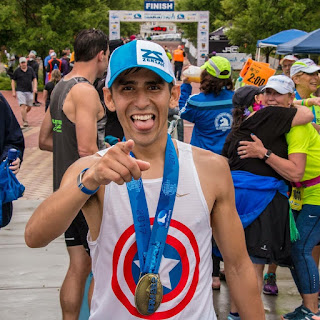 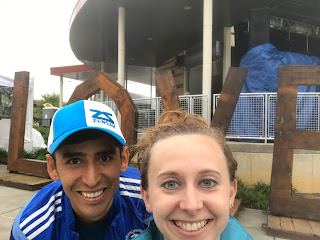 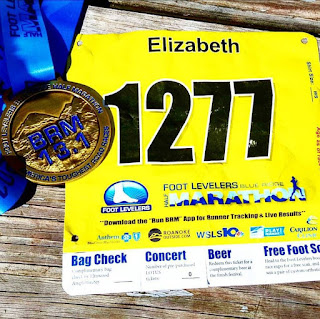 As for what's next on the agenda, we are looking to doing some shorter distances in the near future. What races exactly? We don't know yet. I'm looking into an 8K and a 10 miler (I realize that's not exactly shorter distance but it's shorter than a half right?) and he is looking into working on 5Ks and 8Ks. But don't worry- whatever we decide on doing we'll keep ya posted!
Posted by Mr. and Mrs. Marathon at 9:45 PM

Email ThisBlogThis!Share to TwitterShare to FacebookShare to Pinterest
Labels: 13.1, 26.2, half marathon, marathon