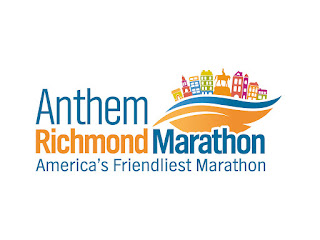 This past weekend, Mr. Marathon and I ventured all the way to the big city of Richmond, VA, from our little rinky-dink town of Bassett for AMERICA'S FRIENDLIEST MARATHON (or so they say...).  The journey was about 4 hours, and once we got there, there was an extremely impressive packet pick-up/expo with tons of vendors. There were more people in that convention center than we have total in Bassett, I'm pretty sure.  Despite the large crowds, we enjoyed the hustle and bustle and the hype that surrounded this massive event.  We were both thrilled to run our respective races (Mr. Marathon was running the full marathon, and I was running the 8K).

We headed on to our hotel to rest up for the next day's racing festivities, which for me, would begin at 7 AM (meaning, we had to get up at 5:30.  omg.)  We made it out the door and then to downtown Richmond in good time on Saturday morning.  We found our way slowly but surely to the designated starting areas.  The corrals and waves for each race were very impressively organized.  Almost TOO organized...  Regardless, I found my way to my corral for the 8K just as the race was beginning.  The 8K took off first thing, when it was only 35 degrees!!  Perfect for me!  Except for the fact that I still had my little cold.  But I'm over that now.

Anyway, Mr. Marathon watched me depart, and then he stuck around to watch the half-marathon begin at 7:30, while waiting for his race to start.  After attempting to stretch (he managed to touch his toes once or twice while shivering), he was ready to get this marathon on the road!  Get it?  It was a road race.  HAH.  Moving on..... Mr. Marathon got going, despite feeling a little disconnected from the whole race experience.  He managed to get a nice starting pace going at the beginning.  After a few miles, he felt that his shoes were tied a little too tightly.  But there was no stopping him by that point.  No way, no how!  He kept on trucking through his discomfort and maintained a good pace until mile 18.  That's when the shoes finally cut off circulation from his head to his toes (maybe he's being a little bit dramatic in his recollection....).  But he kept going, although he was slowing down.  He continued to feel more and more disconnected from the race.  He did not feel as though he was a part of it, even though in reality, he was definitely running it.  All 26.2 miles of it!  He did the best that he could, but in the end, the Richmond Marathon beat Mr. Marathon.  And the moral of this race for him is that you can't over-train for a race.  He felt like he did not train nearly enough for this race, but in his mind, like it always has been and is always going to be, he can take any challenge, any time, any day (even the cold ones).  He knew he could finish it no matter what, but at his time of 3:43:54, he feels like he could have done much better with proper training and preparation.  And that's what he plans to show on his next marathon post.  So stay tuned and wish him luck!!

The Richmond races were our last scheduled races for the month of November, but we will keep you posted on all of our upcoming training and any races we might decide to do (there are 2 in December we are considering!).