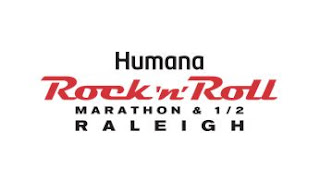 Last weekend we traveled south to Raleigh, NC for the Rock n Roll Raleigh Marathon (for him) and Half Marathon (for me). This has been my goal race for the past several months. I was trained up to go for a personal record (PR) since I haven't PRd a half since the Myrtle Beach Mini Marathon in 2014! I desperately wanted to beat my time of 2:19:55. For Mr. Marathon on the other hand, this was simply a training run. On his personal training plan that he designed to prepare him to run the Boston Marathon and then the Blue Ridge Marathon in the same week, his long run was 22 miles. Because I so desperately wanted to do the half, he figured why not just go ahead and go the extra mile (ok the extra 4.2 miles) and have fun at a marathon? So that's exactly what he did. 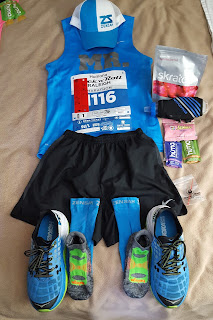 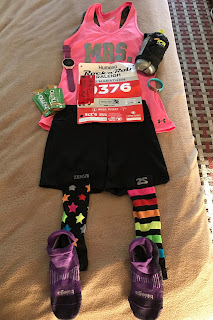 We both hit up the expo, got dinner, and settled in fairly early at our hotel that was less than 5 minutes from the start line. We woke up pretty early to make it back downtown for the 7:00 AM start the next morning. It was a chilly morning, but we knew it was going to warm up to mid-50s, possibly even low 60s so we were dressed in tanks and shorts... without any throwaway gear (oops forgot to pack it!). But nevertheless we were ok! We took off, Mr. Marathon at 7:00 AM on the dot with corral 1, and me at 7:12 AM with corral 10 (even though I was supposed to be with corral 9, but apparently I was a little too far back...). We were off and we ran all around downtown Raleigh!

I really enjoyed the course for the half. It definitely had some rolling hills, which I expected, but the course had a good variety of scenery. I got to see downtown, a lovely park, NC State University's campus, and ... other ... neighborhoods (?? I was delirious at this point sorry I don't recall, but it was awesome). During the beginning of my race, I managed to maintain 9:50-10:10 minute miles for the first 6 miles, and I was shocked when I got to the halfway point. I was on target for about a 2 hour 14 minute half marathon! I was feeling good- strong and consistent. I had a couple of "off" miles, at 10:30-10:40 minutes/mile, but overall I was able to keep my pace low 10 min/mile. As I made my way back through downtown Raleigh, I was still feeling good and I was able to finish up strong with a time of 2:13:11!!!! I was so happy to finish with a 6 minute 44 second PR!

Mr. Marathon took off around downtown Raleigh with the goal of getting his last long run before the Boston Marathon. He planned on enjoying this run and having a great time while getting his miles in. He spent most of his time joking around with other runners, talking to the other runners, laughing up the hills, and oh- of course running too. His boss was running the full marathon as well and caught up to him at mile 7, and they ran together until mile 18. Mr. Marathon was planning to slow down his pace, but having someone else running with him just made him stay at a steady pace. There were plenty of rolling hills along the course from beginning to end, which made it a little challenging to maintain a steady pace throughout. After mile 18, he was running solo again, but still in good spirits and joking with everyone around him, except the runners around him that were NOT in the mood for his shenanigans at this point in the race. It takes a very special kind of person to tolerate being around him at this point, believe me! Humor in the last part of a marathon is not always well received. And by no means does this mean that he is not putting in effort, but him cracking jokes and using his sense of humor was just his way of staying motivated and positive. At mile 19, something else happened that helped him stay motivated and positive. At a water stop, there were volunteers giving out Hawaiian leis, and they were in competition with each other to see who could give the most leis out. So Mr. Marathon decided to help them out. They were offering him one, but he decided to take all of the leis... from 2 different people! As they laughed, that was the seal of approval and the little bit of extra gas in the tank to get him to the finish line. People from then on were very confused. How is he running with all of those leis????? Regardless of how many leis he had on, he finished feeling pretty good in a time of 3:10:38! And of course he looked good doing it!


We really enjoyed our time in Raleigh, and now we are looking ahead at what is coming up. Boston is in just 9 short days, and the Blue Ridge Marathon (for him) and Half Marathon (for her) is in 14 days. Can't wait! Until then, here's some more pictures of our race weekend! 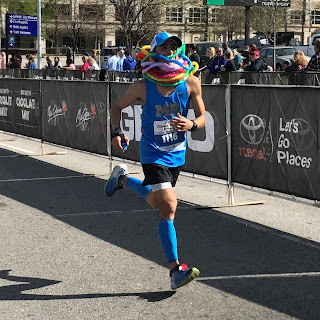