Mr. Marathon here! Last Saturday, March 25, was my final race as a 26 year old! I ran the Martinsville Bulletin Half Marathon (formerly just the Martinsville Half Marathon) which I have run every year since its inaugural running in 2011 (read about previous years here: 2013 and 2014 and 2015 and 2016). I love this race because it's local and it always falls right around my birthday! This year, it was the day before my birthday so it was nice to celebrate my last day as a 26 year old doing what I love..... running! 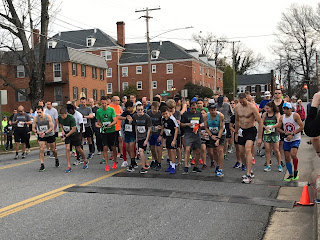 I prepared to run Saturday morning, ate my oatmeal, and headed for the start line. The weather was low 50s and cloudy, so absolutely perfect for a run! I toed the line with 90 of my closest friends and was off and running by 8 AM on the dot. I told myself that the Martinsville Bulletin Half Marathon was going to just be a training run, trying to get a rhythm and push myself a little bit. I wanted to find the limit on my comfort zone with my current level of training. I knew it wasn't going to be as good as last year, but I wanted to figure out my fitness level. I had to do 18 miles that day according to my plan that I had created, so I did 1 mile warm up, 13.1 race, and 4.8 cool down to get me 18.9 total miles. 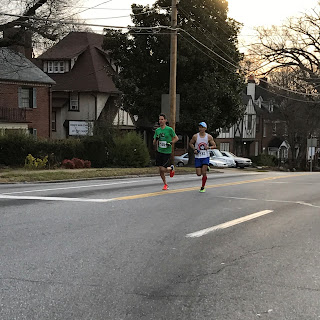 While running in the beginning, it felt smooth and comfortable, but then I had to alter my stride due to some cramping early on at mile 3 again (just like at the MUM). I was kind of glad that the cramps hit at that time on this course because I knew I had some solid downhill miles coming up. But after about a half a mile they didn't go away. They just got worse and spread to both sides of my abdomen and the right side of my chest. When I hit the downhill, I just tried to remain steady because at that point, I was in 3rd overall. I figured maybe I could try to maintain my place, but the fourth place guy was right on my tail so I knew I couldn't give in to my discomfort at all without sacrificing my place. In the back of my head I knew this was only a training run so I didn't have to push too hard so I could be sure to avoid injury since I have the Boston Marathon and the Blue Ridge Marathon coming up in just a few short weeks. However my competitiveness made me think, "If the guy behind me wants third place that bad he's going to have to work for it." 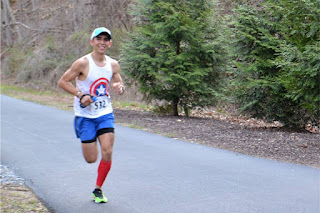 Fourth place guy remained behind me until we got to mile eight and a half. Then when we got a turnaround, I got to see just how far (I mean how close?) behind me he was (100 meters and closing in) I was able to draw out my stride going downhill to try to increase my lead. I still had 4 and a half miles of uphill left. Normally I like to slow down uphill to catch my breath, and I usually let loose and gain speed on the downhills. A few minutes later at mile 10, I was able to hear his footsteps right behind me. I knew he was planning his strategy to catch up to me and pass me. At this point I felt like I was the little engine that could. I think I can, I think I can... stay ahead of him!


Every step I took going uphill took a lot out of me. But like I said before, if the guy behind me wanted third place overall bad enough, he would have to put up a fight for it. I felt as though I was simply prolonging the inevitable-- I felt like he was going to pass me, but I just didn't know when. As we made our way closer and closer to the end, I just knew he was going to pass me. He stayed consistently behind me step after step, mile after mile, and before I knew it I had one mile to go. That last mile came with 2 slight downhills and some major uphill so I knew I had to take advantage of what little downhill I had. With only half a mile left, the lead bike (who is also my brother-in-law) came back  and guided me to the finish line while I was still in third place.


I had to know how much buffer I had between fourth place guy and myself, so I asked my bro-in-law, very out of breath, "How... far... behind...?" and he proceeded to tell me "6 minutes behind," which is how far behind I was from first place, but I just had to know how far behind me fourth place was. I asked again, and he told me he was only about 100 feet behind me! So my heart sank as we were less than half a mile from the finish line. I was afraid he would be able to catch me in the last little bit. All I could do was stay steady and hope for a burst of energy close to the end. As I was less than a quarter of a mile from the finish, I saw a lot of 5Kers finishing up with the crowd cheering for them and for me, and that gave me the last little bit of energy to spring to the finish... in third place overall! Fourth place finished just 16 seconds behind me! 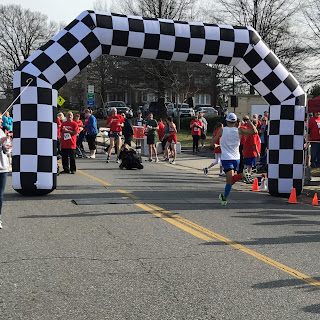 I was very surprised with my performance! I reflected on the race afterwards and thought to myself about how every race is different. I know that I can't compare my abilities and strengths to other races because they were completed under different circumstances. Every year, even every day, we can change, and we have to adapt to these changes and keep in mind that your worst race is somebody else's best, or even their dream time. So be proud of yourself no matter what! This is something I've learned being a part of such a small, tight-knit running community in our area. We have so many people who are different, and have different abilities, goals, and dreams. But the most important thing to remember is to celebrate accomplishments with those around you. I can't wait to see what next year holds, especially since I'm already signed up for next year's Martinsville Bulletin Half Marathon! But as for right now, I am focusing on what tomorrow holds, as we are traveling today to Raleigh, NC, for the Rock n Roll Raleigh Marathon (for me) and Half Marathon (for the missus)! 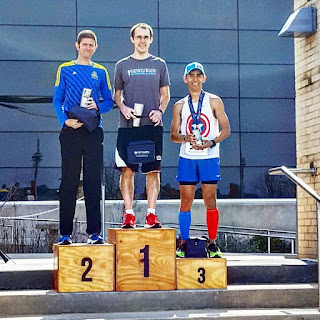 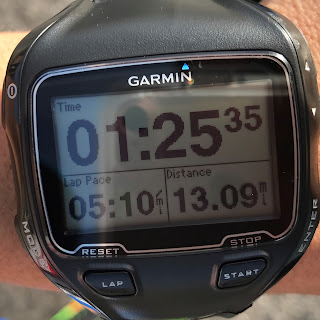