This past weekend was a big weekend in the Garcia family.  Rock and Roll Savannah was not just any marathon: it was a very special marathon for both of us!  For me, it was of course my very first, but for my mister, it was an even bigger deal.  But for those of you who don't know it yet, I'm going to keep you in suspense until later in this post... :)

We took the 6 hour journey south to Savannah, GA, on Friday.  That afternoon, we made it to our hotel, checked in, and hit the expo.  Of course, since it was a Rock and Roll race, the expo was quite a production.  It was tons of fun, we got some cool stuff, then we went out for dinner.  We wanted to play it safe for dinner so we hit up a local Olive Garden and got some pasta (duh), then we headed back to the hotel just in time to prepare all of our gear for the early morning ahead of us.  After putting together our "Flat Stanleys" to make sure we had everything for race day.  Because we decided to take a shuttle from our hotel to the starting line, we had to sign up for the times available.... which was 5:00 AM (2 hours before start) or 6:15 (45 minutes before start, which only left 15 minutes for gear check....).  Of course being the prepared runners we are, we opted for the earlier time, which in turn meant that we would have to wake up even earlier.  I woke up at 3:45 to be ready by 4:45 to board the shuttle by 5.  Yeah... early!  But after getting to bed at around 8, that left enough time to get a good amount of sleep. 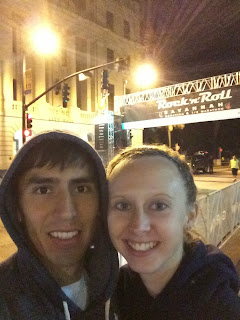 Saturday was a whirlwind of hurry up and wait.  In the morning, we rushed to get ready, and then the shuttle wasn't quite ready to go at the time they said, so we had to wait.  Then we were dropped off somewhere in downtown Savannah and we didn't know where we were, so we had to hurry up and find the starting line.  Then we found it and had to wait-- wait in line for porta-potties, wait in line for gear check, and last but not least, wait in our corrals.  After freezing for an hour an a half, the race was beginning.  At this point, Mr. Marathon and I had parted ways so he could make his way to Corral 2 and I had to stay in Corral 17.  Then the race began and we were off (only I was 23 minutes behind him due to our corrals). 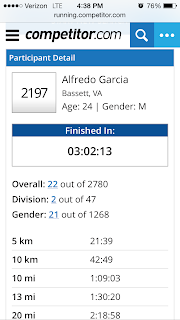 The race started in downtown Savannah, and took us through neighborhoods and historic areas, as well as through a college campus, through a park, and on a highway!  The scenery had great variety, and of course, since it was a Rock and Roll, there was plenty of music and support along the way.  Mr. Marathon had quite the surprise for this race.  His honest goal was to finish at/around 3:15.  Well, he took that goal and smashed it to the ground.  All the way.  Not only did he meet his goal to finish under 3:15, but he met his BOSTON QUALIFYING TIME of 3:05.  Not only did he meet his qualifying time, but he beat it!  His time was 3:02:13!  Not only was this a BQ, but it landed him at 2nd place in his age group!  This has been a goal of his since even before we began this blogging journey, and now, the goal has been met.  Mr. Marathon will become Mr. Boston Marathon really soon!!!

I don't want to steal his thunder, so I'll be doing a separate post on my take on the marathon, coming soon.  Overall, though, we had a fun-filled, eventful weekend!  So until my next post-marathon post about my personal thoughts, feelings, and emotions, I leave you with a photographic journey through our marathon weekend shenanigans. 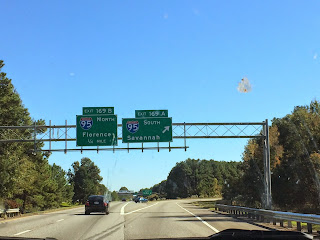