I'm pretty sure that we have mentioned just how much we love our small town races, right? If not, WE LOVE OUR SMALL TOWN RACES! Our local YMCA has a race series called Miles in Martinsville, and they put on quite a few races each year, from 5Ks, 10Ks, a mud run, (this year) a trail run, all the way through a half marathon! The first race on the 2016 calendar for Miles in Martinsville was the Nail the Rail 9 Miler. This race takes place on the Dick and Willie Trail, where we usually run, and it starts at one end at the 0 mile marker, goes out to the 4.5 mile marker (which is the end of the trail), and then back. This is a course that we frequently run when our training plan calls for 9 miles, and if it calls for more, then we'll veer off the trail for a bit to add the mileage. Either way, we run it all the time! It's also part of the course for the Martinsville Half Marathon. However, we have never run just a 9 mile race. And so, this concept is pretty cool. It's where we usually run, but not where we usually race. It also had the added challenge of finishing it in under an hour. Any runner who can finish the whole 9 miles in under and hour will have their name put on a plaque at the trail head. Now, I didn't stand a chance at achieving this, but we thought that Mr. Marathon might be up to the challenge. He wasn't all the way recovered from What's Your Wall? but he was going to try his best. 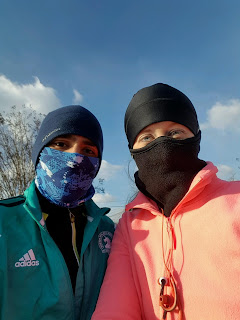 Race day was Saturday February 13. Now, I understand that people from Minnesota, Alaska, Canada, the North Pole and other places that are ridiculously cold in the winter are used to frigid temperatures. We are not. I cave in and use the treadmill for temperatures below 35 degrees usually. Mr. Marathon has braved colder temps, but he does not enjoy it. At the time of the race, it was a whopping 21 degrees with 20 mph winds, putting the windchill at 9 degrees. Um, ok that's really cold for us! Regardless, we bundled up and hit the trail because we sure do love our small town races!

Our YMCA was considerate enough to have their bus there at the starting line cranked up for heat pre/post-race. So that's where all the runners gathered before the run. When it was about 6 minutes to start, we had to venture out into the arctic conditions. Brrr! About 30 runners of varying ability levels hit the trail for the 9 chilly miles, Mr. Marathon being in the top of the pack, and me being closer to the middle. He wasn't sure that he'd be able to "Nail the Rail" in under an hour, seeing as he had just run 105 miles in a week, then picked right back up marathon training with only one rest day. He ended up rocking it out and finishing with a time of 58:40! He was one of 4 that nailed the rail, and he came in 3rd place overall. I ended up finishing with a time of 1:37:48, which means I beat my goal of finishing in under 1:40 (under 11:00 min/mile pace average)! 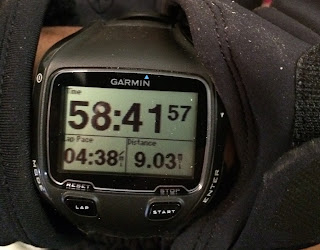 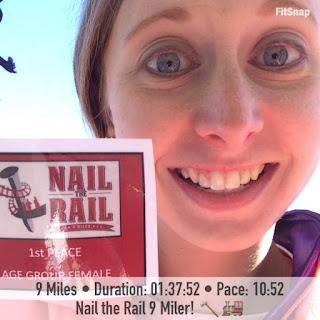 Despite the freakishly cold weather, we both were pleased with our run. Also, this run fit perfectly in with training for the Martinsville Half Marathon (which will be March 19th). That run is on the docket, along with Blue Ridge and Boston. Those are the main events of Spring 2016, but hopefully I will be doing some 5Ks and 10Ks to not only supplement my training, but I'm also in pursuit of potential new PRs! Wish us luck in our training, and keep up with our weekly updates on our new Facebook page! Follow us here!

And as we mentioned above- Miles in Martinsville has plenty of great races planned for this year, so check out the website. We'd love to see you (Yes you! Any of you! ALL OF YOU!) at any of their upcoming events!