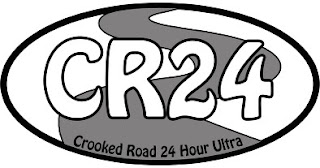 A lot has been going on lately! Both of us have been super busy with the end of the semester, finals, and school coming to a close before Christmas break! But before Thanksgiving, we were supposed to tackle the Crooked Road 24 Hour Ultra on November 19! I say supposed to because one of us (ahem... ME) got pneumonia and couldn't participate. The other one got to go, and so we are finally getting around to doing the blog post... 3 weeks later. Whoops! Anyway, here we go!

Mr. Marathon had to leave me at home for this event, and I was just devastated. I was at home, coughing and being miserable. I was diagnosed with a sinus infection, bronchitis, and pneumonia on the Friday, the day before the event. We had come up with a game plan, and by game plan I mean I would stay at home eating soup and being sad and he got to go run in the event. He drove up to Rocky Mount which is about 30 minutes from where we are, and he got there ready for the 8:00 AM start on Saturday morning. The weather wasn't bad (yet) and they were off! 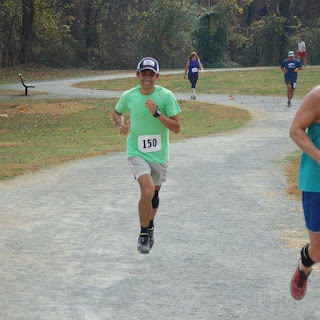 So as the race started, there were a few people who started at a nice pace. Mr. Marathon was not tracking his mileage with his GPS watch, but rather he was just keeping up with the time. He was just keeping pace with the guys at the front of the pack. He said it felt fast, but why not?? After a few laps (each lap was 1.2 miles) the other guys that were up front started slowing down, and Mr. Marathon managed to stay steady. His first break was at the half marathon mark and he took a rest lap and just walked it. 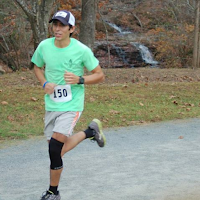 Then he started back at it. As he was running, he decided his next break would be at the marathon mark. Throughout the run, since the event had a very nice fueling station right beside the course that all runners ran by during each and every lap, he could grab Gatorade, water, and snacks of all kinds and just keeping on running. As he approached the marathon mark, he decided to take a 15-20 minute break to really get some good fueling in rather than just eating on the run. He got to take some layers off because the weather had warmed up into the 60s! People were running in tank tops and shorts, or even shirtless!

It was time for him to get back to running until he hit the 50K mark. At this point in the day, it was late morning, and he was already beginning to notice some aches and pains, specifically in his foot, knee, and hip. He had noticed these aches and pains beginning to pop up since before we ran the Marshall University Marathon in mid-October when our training was still pretty intense. Despite his aches, he kept on going. 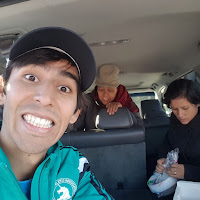 After the 50K mark, on towards the 40 mile mark, the wind started to pick up and the temperature started to drop significantly around noon. He had to start putting back on the layers that he had just taken off. The aches and pains were definitely there and started to get to him. Fortunately there were some familiar faces that had arrived. As he was walking past the aid station, or more importantly the SNACK STATION!, a little kid ran up to him and grabbed hold of his leg. Why does this kid look so familiar???? he asked himself. Turns out, it was his nephew! Then he looked up to the parking lot and saw his mom, his sister, and his niece! Not only did they bring their presence, but they brought FOOD! Hot soup and hot tea... mmmmmmmm! So he got to camp out in the back of their car and enjoy this awesome surprise! He had to put on a brave act and pretend that everything was fine so his family wouldn't worry about him. He said his goodbyes and hit the trail running again. 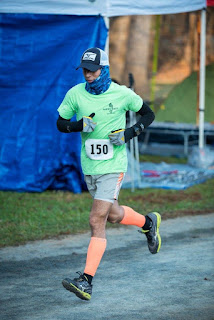 For the next 10 miles, he was trying to rest up but definitely keep moving. He finally hit 50 miles at around 6:00 PM. The aches and pains were still very much present and hurting him pretty badly, so he took a break before he did any more. After about 15 minutes he started trying to run/walk but mostly run to stay warm! He was feeling very drained and needed some energy or rest. So he passed by the snack bar (lol) and grabbed a handful of cookies. And by a handful of cookies, I mean like 12 (full size) cookies.... WHAT. He said he "needed the energy".... Anyway, this was at 55 miles, and so he snuggled up (with his precious cookies) in my car that he took (since it was big enough to blow up the air mattress in the back!) and he took a nap that he did not officially consent to.... Ok so then he woke up from this surprise nap shivering with handful of cookies. Bless his little heart. He looked at his watch and noticed that it was around 7:40 PM and he Facetimed me! He was very disheartened due to all of his aches and fatigue, and he really wanted to stop. At this point, I was trying to be encouraging to help him make it to the distance he ran last year (64.98 miles). I didn't really know what he was enduring, but all I did know was that I was freezing cold inside our house because of the cold wind that had moved into our area, so I can only imagine trying to run in it. 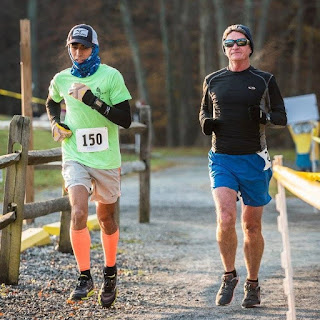 After we hung up, he was feeling discouraged because he was hurting so bad but he knew he had to keep going to 65 miles. That was the new goal at this point. It was about 8:15 PM, and it was dark and windy and cold and miserable. That made it all that much harder to get out and run, but he did! He changed into his tights (he had been wearing shorts up until this point!) and put on a few extra layers on top and a beanie and some gloves and got out and got walking to try to warm up (lol) his body. 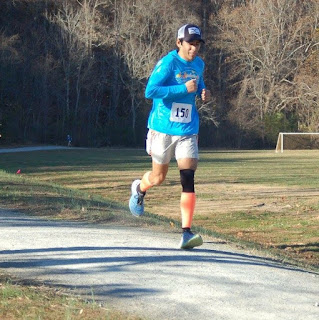 When he made it to the 100K (62 miles) it was 38 degrees with 28 windchill! Brr! You also have to keep in mind that the weather earlier in the week was in the 60s pretty much every day. This was a rude (and very cold!) wake up call! His body was warmed up and he was trying to stay moving and wasn't going to stop until he reached his 65 miles. His body was still hurting, but he noticed that it was aching less when he tried to run as opposed to just walking. Granted, aching less doesn't mean it didn't hurt when he was running. Just a more tolerable pain.

As he hit 65 miles, he was walking with a few jokesters who were very encouraging in great spirits despite the conditions. They were carrying on having a jolly old time! So Mr. Marathon was able to keep on keeping on. At this point he decided to hit 70 miles as his new goal. As he was running he was thinking that he stopped at 62 miles last time so he should stop again at 72 miles. He hit the 72 miles mark with about 4 and a half hours left. He knew that he had to stay moving if he wanted to hit the 100 mile mark, which was a goal that was in the back of his mind this whole time. He got a burst of motivation and decided that he was going to run! He felt that he was running at like a 5 or 6 min/mile pace (his usual). Remember, he was not tracking his distance or pace with his GPS watch. But since there were people keeping up with laps and timing and yelling out lap count, they also yelled out his pace... and he was moving at a 10:05 min/mile pace. Which is a little different that 5 or 6 min/mile pace. He couldn't believe it, since he was pushing SO HARD, He decided to continue and just keep pushing and giving it all he had, even if it was a 10:05 min/mile pace.


Finally, he decided to stop and calculate how far he was and how long he had. He was at 81.5 miles. He did the math and he had 3 and a half hours left. And his body was hurting bad, still. He knew that he wouldn't be able to maintain the 10ish minute miles, and with 18.5 miles left, so he knew he would have to maintain at least an 11:30 min/mile pace. (He had plenty of time to do math to occupy his brain!) He knew he wouldn't be able to keep that up, especially since he hadn't even gotten to take a break from the last 10 miles he finished. He had to think: What's going to be harder? That I stop now? Or keep going and come just shy of 100 miles after going through all of this extra pain? At this point, he decided to valiantly bow out and accept his great accomplishment of completing 81.5 miles. This is 16.5 miles more than he did last year, and the total mileage was just a little over the equivalent of 3 full marathons! He also wanted to get home to his sickly wife (cough cough). So he said his goodbyes, and arrived home at 6:00 AM Sunday morning. He took a hot shower immediately trying to thaw out a little bit, then went to SLEEP!

Final thoughts: He fell short of his crazy far-fetched goal of 100 miles that he says he could have probably reached if he had started more conservatively earlier in the day. However, the aches and pains that he had would have probably still hit him because of the hard races that he had leading up to this event (cross country races, Spartan race, and the MUM). He is glad that he was able to recognize his limitations and not push himself to the point of serious injury. This just prolongs the 100 mile. Til we meet again, Crooked Road.