This past weekend sure was a busy one for us!  On Saturday, Mr. Marathon hit the mud at the Helgramite Hustle Mud Run at the Smith River Fest in Martinsville.  Because of all the rain from the previous days, the mud run was EXTRA muddy... in places that weren't really intended to be muddy.  The more mud the merrier, though, right?  Mr. Marathon was the reigning champ for the race, seeing as he came in first overall last year (READ ABOUT IT HERE!).  But this year was a little more challenging, because of the extra mud caused by the rain as well as a couple of other factors. 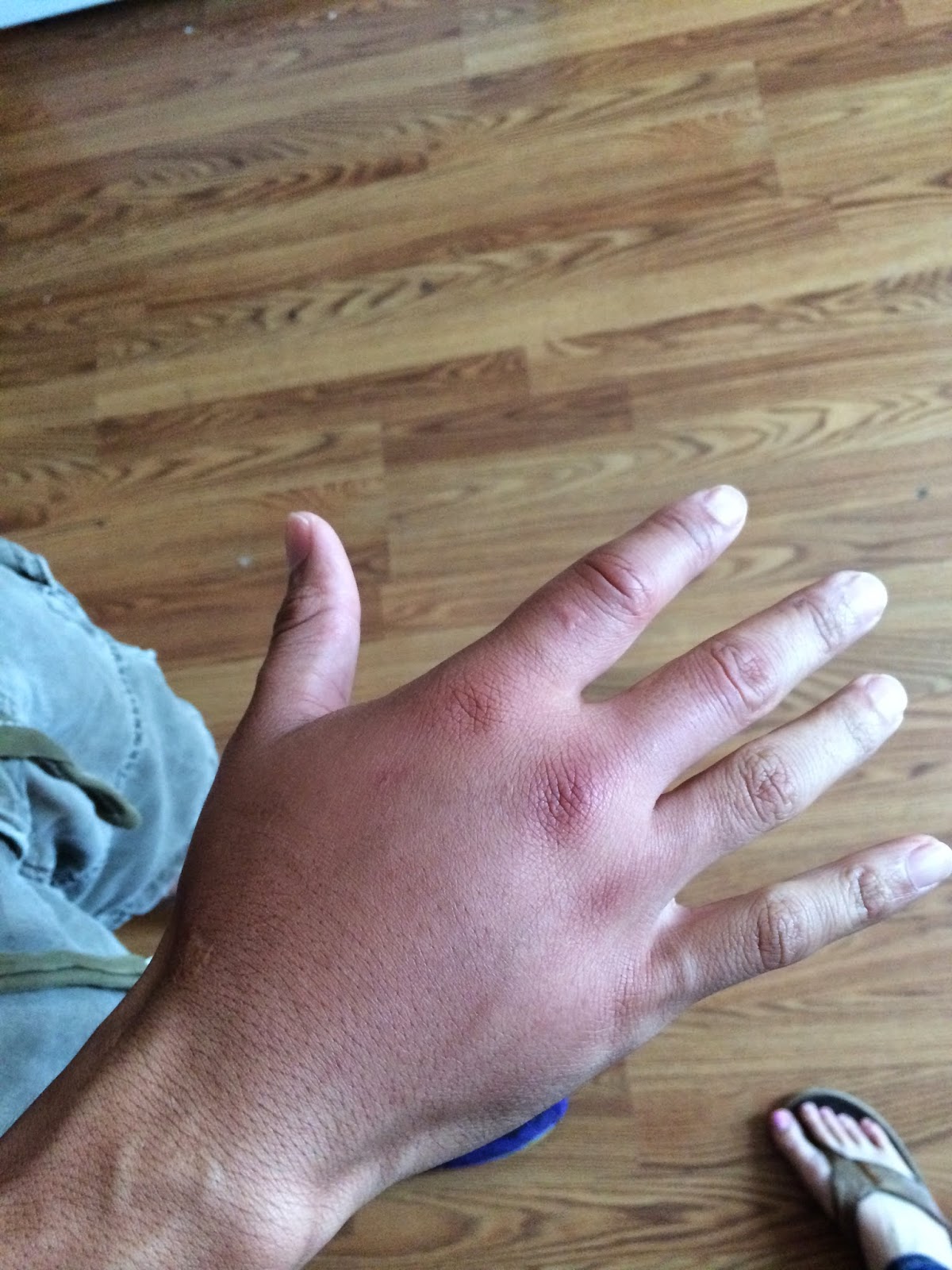 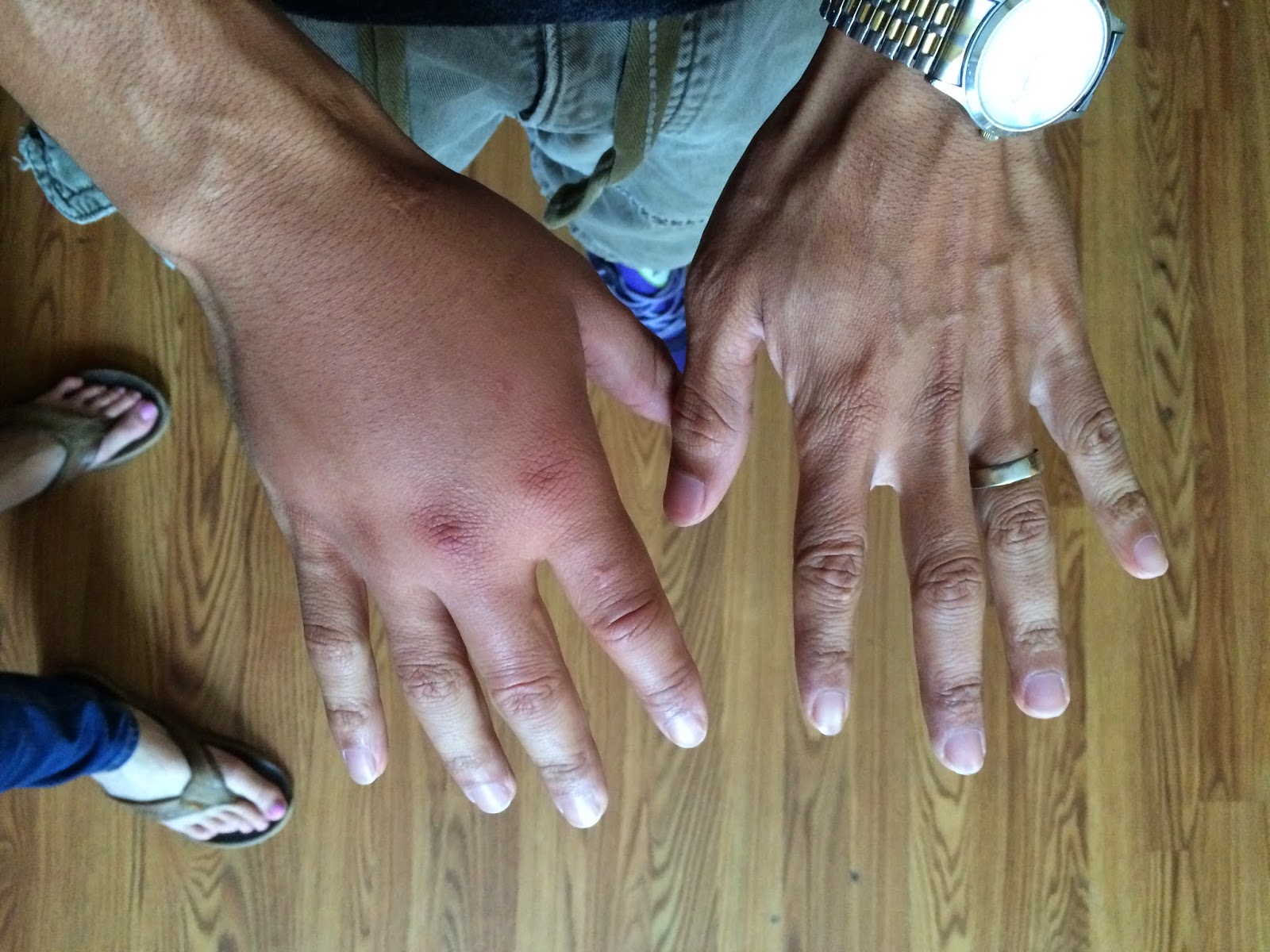 First of all, we need to back up a week to last Sunday... a week before Mr. Marathon's busy weekend.  After a Sunday morning training run with some friends, a bumble bee decided that it was in the mood for some Mexican.  Kidding!  But seriously.  It stung Mr. Marathon, and he had never been stung by a BUMBLE BEE before.  Wasps, yes.  Yellow jackets, yes.  Sweat bees, yes.  But a bumble bee?  Never!  If anybody has told you that they don't sting, THEY ARE LYING.  Because they do.  And it did.  It stung him right in the hand on his right index finger.  It was totally painful when it happened, but the after effects were a little more serious.  His hand swelled up to like twice its natural size and it was itchy and hot for a couple of days.  After copious amounts of Benadryl and cortisone cream, his hand started to feel better (and look better).

Now fast forward to Saturday.  While running this mud run, Mr. Marathon was running and performing the obstacles just fine and dandy.  Until after the first major uphill in the first half a mile, that is.  That's when he started noticing something a little off.  His breathing was affecting him at this point.  His throat felt as though it was closing up, and he started wheezing A LOT.  However, he is pretty good about controlling his breathing, which helped him to not panic while this was going on.  He made the connection between this breathing issue and his bee sting after the run.  After spending lots and lots of quality time in an allergy center (for all my testing) he considered maybe it was an after-effect of being stung, because he obviously had some kind of reaction to it.  I think I'm going to chalk this one up to sympathy asthma because of me.

But that's just one extra challenge he faced at the mud run.  The other one is my personal favorite.  There was a large slip-and-slide about halfway through the course.  Mr. Marathon breezed down the slide looking strong and holding on to a close third place overall spot. When he got to the bottom of the slide, he put his hand down to slow himself down and prop himself up when all of a sudden, he popped up to take off running and something felt odd on his left hand.  No, he didn't get stung by another bee, don't worry!  But it's worse.  Kidding.  Kind of.  Anyway, he felt that something was missing from his ring finger on his left hand.  Yes, I'm talking about his WEDDING RING.  He immediately turned around and raced back to the slide, which fortunately was still close by because he realized this pretty quick.  As he was frantically looking for it, there was a photographer who also helped him dig through the mud (the same one that took that picture of him on the slide!).  A good minute later the photographer found it!  He slapped it back on his finger (tightly and cautiously, with love, of course) and balled up his fist tight for the rest of the race and he was off!  However, by that point, he managed to make his way to fifth place and decided to just cruise and maintain his fifth place, which he did.  Fifth place overall, but first place in his age group ain't too shabby considering everything he went through!

On a more positive note, Mr. Marathon's brother, Ramiro decided to participate as well!  This was his first 5K, let alone a 5K mud run.  He had a great time participating, AND he won 3rd place in his age group!  Wowie zowie!  Speed must RUN in their genes... get it.... RUN?  HAH.


Another positive note about Saturday was my dad ran this race as well.  Even though he's run 5Ks and 10Ks and all that good stuff, he got to run a MUD RUN!  Pretty awesome for an old man!  Not to mention the fact that he placed first in his age group, AND he helped an older woman over an obstacle.  A winner AND a gentleman!


Sunday was an eventful day for Mr. Marathon as well, but this post is long enough, so be on the lookout for Part II, coming soon!

Email ThisBlogThis!Share to TwitterShare to FacebookShare to Pinterest
Labels: obstacle