Earlier this month on June 3rd, Mr. Marathon and I headed north to Baltimore, Maryland for the first time ever! We had signed up for the Baltimore 10 Miler after I found it just browsing races one day. And I got sucked in by the fact that I had never officially done a 10 mile race before, and the promise of some awesome swag. We made the drive on the Friday before the Saturday race, and boy was it full of traffic! We aren't used to traffic in our sleepy little small town, so driving through both Richmond, VA and Washington DC/Northern VA was a very stressful situation. But we made it after quite a few hours, and fortunately we were approved for race day bib pickup so we didn't have to rush on the night before.

Race day was upon us and we were instructed to be at the zoo where the race started and finished by 6:30 at the latest so that meant we had to leave from where we were staying by like 5:45. That made for a very early morning! We made it in time, and got ready to go. It was a beautiful morning, a little cloudy and cool. Both of us went into this race with some time goals. I wanted to keep my overall pace below 10:00 min/mile which would put me at finishing under 1:40. Mr. Marathon wanted to finish between 1:05-1:10. 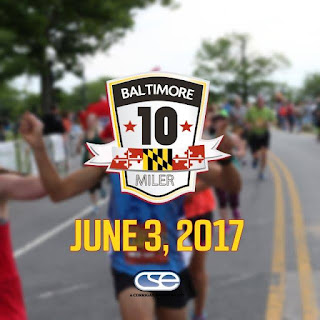 This race was advertised as a challenging but fair course, and that it was indeed. I managed to take off  right at target pace. My first 5 miles were all under 9:40 min/mile pace, and I was right on track for my goal. The first half did have a lot of rolling hills, but was noticeably more downhill. So, I unfortunately knew that the second half would be more uphill. I finished the first half in 46:50. I plodded through the next half with most of my miles hovering between 10:00-10:37 min/mile. There were 2 major hills that really slowed my pace but overall I managed to keep my pace under my goal and I finished in 1:38:50 with an average pace of 9:53 min/mile!

Mr. Marathon has been focusing more on short distance and speed, so this 10 miler wasn't really about hitting a certain pace, but as I mentioned before, he thought he was capable of getting 1:05-1:10. He pushed very consistently throughout.  He did mention that the course was challenging, and agreed that the first half was ok, but the second half was tough and noticeably more uphill. When he took off, he didn't quite feel like he was pushing just yet, but after a mile he realized that he was going all downhill, meaning he was going to have to finish up this same hill. That was slightly terrifying. But it didn't finish up that hill. Even better, we hit the hill coming back at mile 8, and then the course continued around a looping area of parking lot and driveways... which were all uphill. So essentially the last 2 miles were uphill. And yet he still ended up finishing in 1:05:47, which he was absolutely thrilled about! 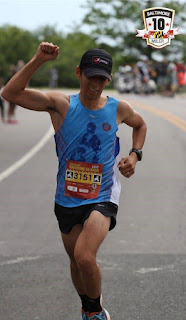 After the race, we got to spend time with my dear friend walking around Annapolis, Maryland exploring the city! And now- PIX! 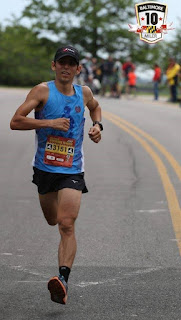 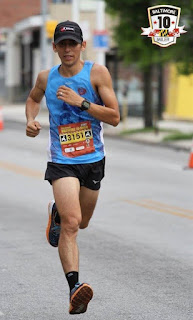 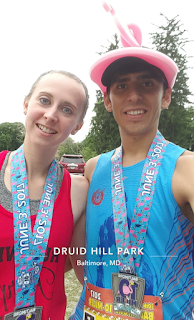 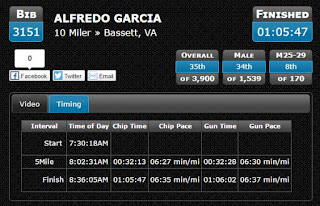 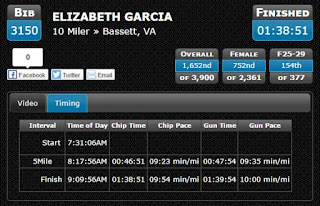