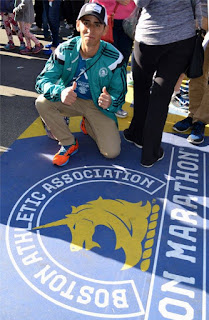 As those of you following our story know, the weekend of April 16-19 was a pretty busy one for us! We discussed the craziness that is the Blue Ridge Marathon and Star 10K in Part 1 of our Marathon Weekend recap. Well this post is for Part 2, which started on Sunday bright and early at 5:00 AM when we left from Roanoke (where the Blue Ridge Marathon was held) and flew to Charlotte, NC and caught our connection flight to **drum roll**.....


We landed in Boston at around noon and checked into our hotel and hit the expo! First of all, though, we had to figure out the subway system, which fortunately wasn't that hard once we figured out how to use the kiosks to buy the tickets! Anyway, we hopped on the Blue Line, switched over to the Green Line (don't I sound totally Boston?) and we got to the expo on the one and only BOYLSTON STREET! The expo was crazy busy with a ton of hustle and bustle of marathoners and spectators alike. Mr. Marathon picked up his bib and his shirt and then we went to check out all the vendors. And believe you me, there were plenty to see! We saw Runner's World, Nuun, Clif, Healthy Warrior, Sam Adams (which was giving away free beer! that we didn't drink!), CEP compression, the Rock 'n' Roll Marathon series, and so, so, SO many more! Oh, and I think Adidas may have been there? (note: Adidas is like the main sponsor for the Boston Marathon. And they had the first quarter of the gigantic room for their booth. And there was a ton of Adidas merch. EVERYWHERE.)

After braving the expo, we had some pizza at a local pizza place (Il Monda Pizzeria) that had GINORMOUS slices of pizza! Of course some of us (cough cough ALFREDO) had to have two. Ok, I'll cut him some slack because he was carbo-loading in preparation for the marathon. As well as still recovering from the marathon the previous day. After eating pizza, we walked around Massachusetts Avenue and surrounding streets for a little while and made our way back to Boylston Street to see the Finish Line! I knew that as a spectator, I wouldn't really get to see the finish line up close and personal on Monday, so I was excited to see everything before the marathon. So we took some pictures and gallivanted around Boston for a little while, then took the T (that's what they call the subway) back to our hotel and settled in and called for dinner, even though we had just eaten mere hours before. Carbo-loading AND recovery, remember???


The next morning, we (Mr. Marathon) had to wake up at 4:15 AM to get ready to take the T to the Boston Commons to catch his shuttle to the starting line in Hopkinton. He made his way and caught the shuttle at 6:00 AM and hung out at Athlete's Village until around 9:00 to get in his corral/wave for his 10:00 (ish) start time. Wave 1, Corral 1 started at 10, but he was in Corral 6 so that means he started a few minutes past 10. His race was a little more challenging than he expected. I mean, let's be honest- he had just run 26.2 miles on 3 mountains 48 hours before, but Boston has a net downhill elevation. What he didn't expect is that even though it's got a net downhill, ummm, it's still 26.2 miles, and it's still hard, especially on not-so-fresh legs!

The most interesting thing about this race for him was the fact that he hit a reverse wall...?? Don't understand? Stay with me. So what happened was he figured he would start feeling loosey goosey by the time he hit 6 miles, and he looked at his watch: boom! 6 miles arrived. And he still did not have that feeling he was looking for. He was hoping his legs would become warmed up, loosened up, and no longer stiff, and that they would be ready to run. But instead, he just had to keep pushing, especially because of the small hills that started popping up. One thing in his head was the he refused to walk. He didn't walk at Blue Ridge, so no way was he walking at Boston. The fact that he refused to walk caused him to experience a feeling of accomplishment, and once he arrived at Heartbreak Hill (starting at around mile 18), there were so many people walking up it. Not him. He was determined to keep running, and so that's exactly what he did. He tackled it, and the real reward was at the top: just 10K to go and his body had finally loosened up! At this point in the race he got a surge of energy! (Does this happen to anybody else in a marathon? Anybody??? No???? Didn't think so) He was just passing people who were cramping, walking, slowing down, giving up. But he felt great! All he kept doing was just waiting for that rush to come crashing down, mile after mile. But it didn't! He rode that (endorphin) high all the way through the finish. So after dragging through Hopkinton, Ashland, Framingham, Natick, and Wellesley, and pushing through Newton, and breezing through Brookline, he made it all the way through the finish with a right on Hereford, left on Boylston to the finish! However, once he made that left on Boylston, he was expecting the finish line... instantly. It seemed like it went on forever. It was disheartening, but nonetheless he crossed the finish line with a time of 3:10:27!!! He was proud of his time, but more proud of the fact that he refused to quit, and he gave it everything he had.

As for what's next: we have no clue. Blue Ridge Marathon 2017, Boston Marathon 2017 (if he manages to get his spot, thanks to his Charleston Marathon 2016 time), and possibly some other races here and there. And lots of recovery miles, of course. And food. Lots of that too. Considering while writing this post, SOMEONE (ahem, HIM) has eaten 4 pieces of pizza and 2 ice cream sandwiches.... HAH! We will also have to come up with a new blog title, considering we have completed our mission and this blog has become a reality. From Bassett to Boston: done. From 13.1 to 26.2: done!!! 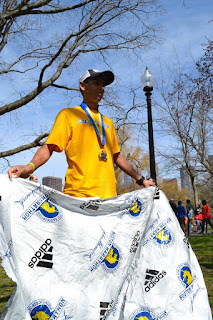 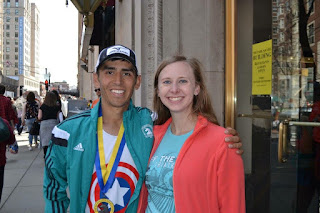 Til next time, y'all!