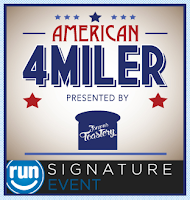 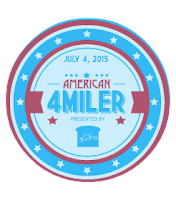 This past weekend for the 4th of July, we made a trip back down to Charlotte, NC for the 4 Miler hosted by local running store, Run for Your Life because we loved last year's race so much! Read about it here! This year, we enjoyed the same fun race, with the same great atmosphere, and the same neat expo at the finish line.


Only, this year had a couple of additional perks from last year. First of all, the shirts. Oh, the shirts! These shirts are the best race shirts either me or mister have ever gotten. They were not only tech shirts, but they were gender specific as well. Not only tech and gender specific, but they were TANKS too! Not only were they tanks, but they had a really cool design! They had a lot going for them, so kudos to Run for Your Life for not only sending out a survey to see what runners who are participating in your races really want, but actually taking it into consideration. I have already worn it running and gotten some compliments on it!


Second of all, we met the coolest lady on the face of the planet, Harriette Thompson. If you haven't heard of her, well, you should! This lady is the oldest female to complete a full marathon. Not only is this lady awesome for being the oldest female marathoner, but she has a heart of gold, too. She doesn't run marathons just for the fame or the glory. She does it to raise cancer awareness. She herself is a two-time cancer survivor, according to the article on competitor.com, but she stated in the video that is circulating Facebook, which is where I initially found out about her, that she ran the San Diego Marathon in honor of her son, who found out he has cancer as well. I'm not just randomly talking about this random awesome lady. Turns out this lady is a Charlotte native. And she was participating in the American 4 Miler! And we met her!!!!!!! We were so inspired to meet this role-model. I want to be just like Harriette when I grow up. (Here is another bit about her... she truly is amazing!!!!)

Oh, and I almost forgot to mention something. My goal for this race was to beat last year's time of 42:41. I had that time ingrained in my mind. I had to beat it. I knew I would beat it. I would just cry if I couldn't beat last year's time. Well I crossed the finish line and my watch had told me that I had beat my time. I checked my official time (it was chip-timed) at the results tent where there were computers, and the screen popped up after I typed in my bib number. On that screen was the time in big white letters.... 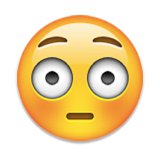 ...and I was about to cry. In fact, I may have said some not-so-nice things to the lady who was manning the results tent. I asked her if this was the official time or just the gun time, and she said "I guess these are official times????" and so I showed her my watch and flipped out. I walked away incredibly disappointed, trying to enjoy the fun expo with all the free stuff. Anyway, it gets better don't worry. I went home and checked my email to see that the official results were finally posted. Turns out, those times earlier were just gun times. Not chip times.... heh.... I kind of should have figured that. So soon after the race shouldn't have been the official times. I feel bad so I'm just gonna put it out there that I'm sorry for being rude to that lady, please forgive me! My time was really 42:16. Which may not seem that much different to normal people, but hey-- I met my goal. By 25 seconds. The end.

Overall, we had a fun time in Charlotte for this year's 4 Miler. It still is one of the better races we have participated in, and the shirt is the best race shirt either of us have ever gotten. Tons of fun! Now, enjoy some random pictures from race day!