I realize that as runners, we will all experience some type of setback every now and then.  So often, runners will experience overuse injuries, sore muscles, tendinitis, and oh so much more, I'm sure.  I have been so lucky to not experience any major setback since I began running three years ago.  However, lately I have been really struggling with my breathing.  I stopped running a little bit over the past school year.  Yes, I admit I slacked off significantly.  However, when I bounced back and began running again, I was unable to get a good breath in while I was running.  My chest felt tight, and I had to "yawn" to get a deep breath, which wasn't really a yawn but rather it was more of a gasp for air.
This began my adventure to find a diagnosis.  The doctors tried me out on some different medications for some different conditions.  After taking various medication for about six months with no relief related to my breathing and chest pain/tightness that after many visits and follow-ups, my doctor finally decided to try a PFT, which is a pulmonary function test, to see if there was any obstruction in my lungs.


That test was conclusive.
I have asthma. 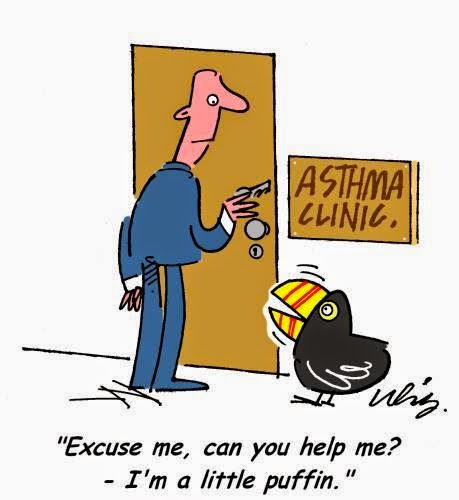 I was very relieved to get this diagnosis, but I was also a little bummed.  Asthma means you can't breathe, and if you can't breathe, you can't run, right?!?!?!  Well, fortunately since I have been running with no issues previously and the onset of my asthma symptoms was so sudden, my doctor referred me to an allergist to do some tests.  Just this past Friday, I had my appointment with the allergist.  After tons of pricks and pokes of shots, he determined that I am highly, highly allergic to some very ordinary, everyday things, including dust mites and tons of different kinds of pollen.  Apparently, this season's pollen counts were higher than they have been, so the fact that I'm so highly allergic to most trees, weeds, and grass, caused me to develop allergic asthma.  Allergic asthma?  So my allergies got so bad they gave me asthma?  Whaaaaat?  Anyway, because this is allergic asthma, there are things I can try to hopefully reduce asthma symptoms or even maybe get rid of it altogether!  Allergy shots can lessen the effect that the allergens have on me, since I can't really avoid pollen and stuff while running, and dust mites are everywhere.  Yeah, I can do things to reduce my contact with these allergens, but I can't get rid of them all.  So allergy shots are worth a try.  Most allergy shots are given in a determined interval of time, like twice a week for the first round, then once a week, then up to once a month!  However, this process can take years.  Wah wah!  But wait- there's more!  My doctor then told me about a process called rush immunotherapy.  This type of immunotherapy is like the allergy shots, but (obviously) rushed.  So instead of getting shots over a lengthy period of time, I can get a lot in one day, every half hour.  So, that's exactly what I'm going to do!


So that's that, then.  For now, anyway.  I'm trying to work through it right now, back from square one, or at least it feels like it.  For the past three months now, I have been on two daily asthma medicines, and I also have a rescue inhaler for when I'm running.  I have been working through it, and I've been running a little slower than I used to, but I've been running nonetheless.  In fact, just yesterday, I did 7 miles!  Very very slowly, but I did it!  Hopefully after my immunotherapy will help... we'll see! 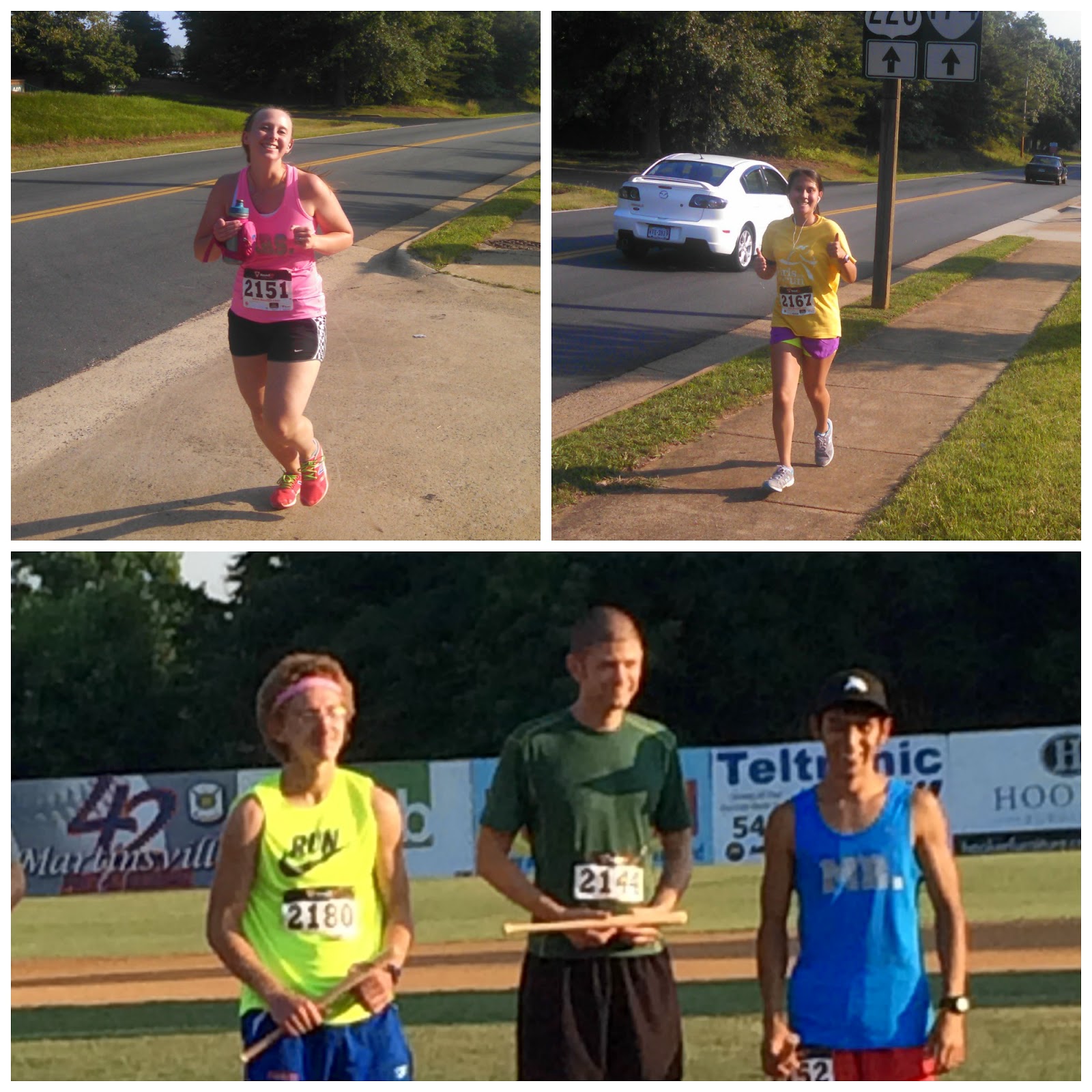 This past Friday, July 11, Mr. Marathon and I decided to run the Inaugural Martinsville Mustangs 5K.  The Martinsville Mustangs are the local baseball team, and this 5K partnered with them to put on this great event.   The run started around the baseball field, then went around a part of Martinsville that neither of us have ever run around before.  There hasn't been a race around this area, and it was around my old high school, which I thought was really cool!  Then, it ended back on the baseball field, crossing home plate.  It was a lot of fun because after the run, awards were given on the field, and then all the runners got tickets to the Mustangs' double header game that evening.  The atmosphere of this whole event was just super fun.  We always love our small-town races, because they are the friendliest, and this was no exception! 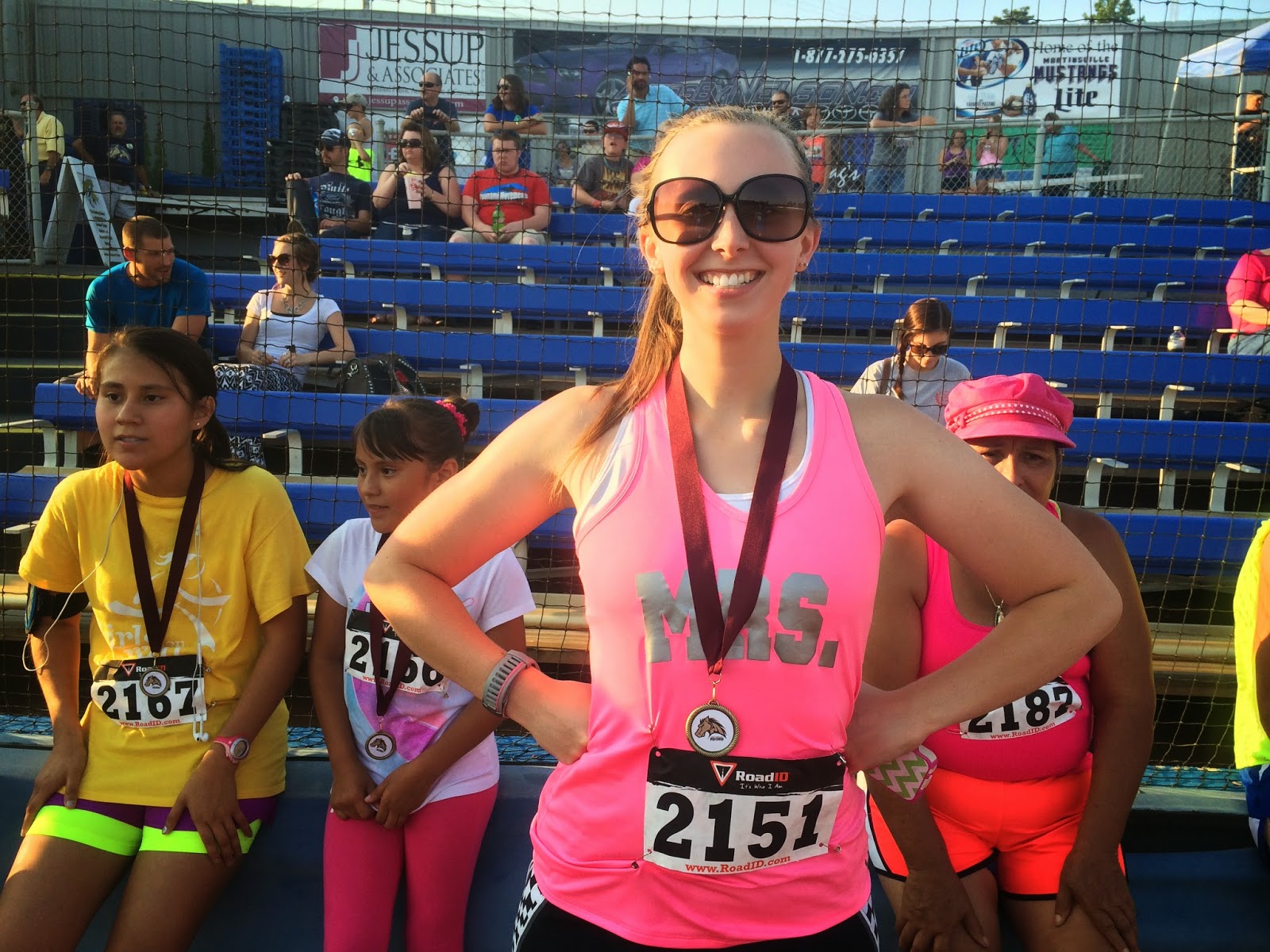 Oh, and of course Mr. Marathon did awesome.  He finished first overall, with a new PR of 18:47!!!!!  He managed to do that in the 6:00 PM heat in July!  Crazy.  Oh, and I got a medal too!  Second place in my age group! :)  This race was featured in our local paper, the Martinsville Bulletin.  Check out the article!  My favorite part of the article is a quote by my eloquent husband: 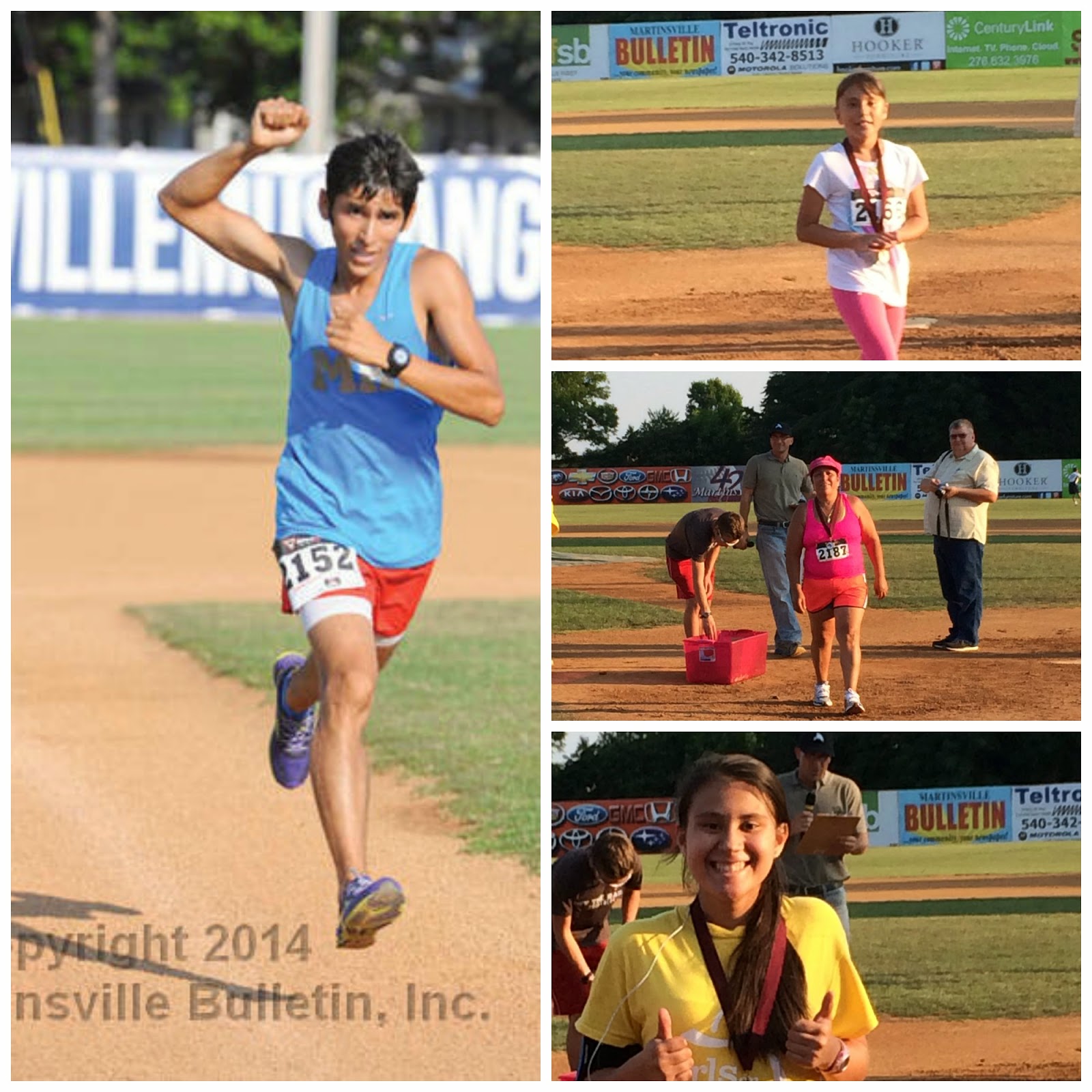 "To be honest, I don’t consider myself the winner because everyone is doing the same course, in the same humidity, with the same sun, and that makes everyone a winner.”

Anyway, we have a few down weeks until the Helgramite Hustle Mud Run!

Last Thursday, July 3, Mr. Marathon and I traveled south a couple of hours to the big city of Charlotte, NC for the July 4th Spectacular 4 Miler.  We traveled the night before so we could relax at a hotel and get a good night's sleep, considering the run would start at 7:30 AM.  After an enjoyable, stormy evening the night before, we woke up bright and early on the 4th of July, ready to run.  We put on our homemade Captain America-inspired tanks and patriotically made our way to the starting location.

This race was a fairly big production!  There were over 600 runners in this event, but fortunately it was chip-timed.  Mr. Marathon still started close the front and I still started closer to the back, and we were off!  The weather was perfect in the morning.  Despite the horrendous Hurricane Arthur-related storms the night before, the humidity level was pleasantly low and the temperature was in the mid 60s..... ahhhhh perfect!  And it really showed in my attitude and my time.  I kept a wonderful pace of about 10 and a half minutes per mile, which put me at hitting the 3 mile mark at about 31 minutes!!!!!  That's the best I've seen in a while.  I ended up finishing 42:41, which I was totally happy with, considering I wanted to finish faster than 45 minutes.  Mr. Marathon was obviously awesome as well (like always).  He finished in 24:58, which he was satisfied with, too.  He had a goal to finish between 25 and 30 minutes, so he beat his goal, too! 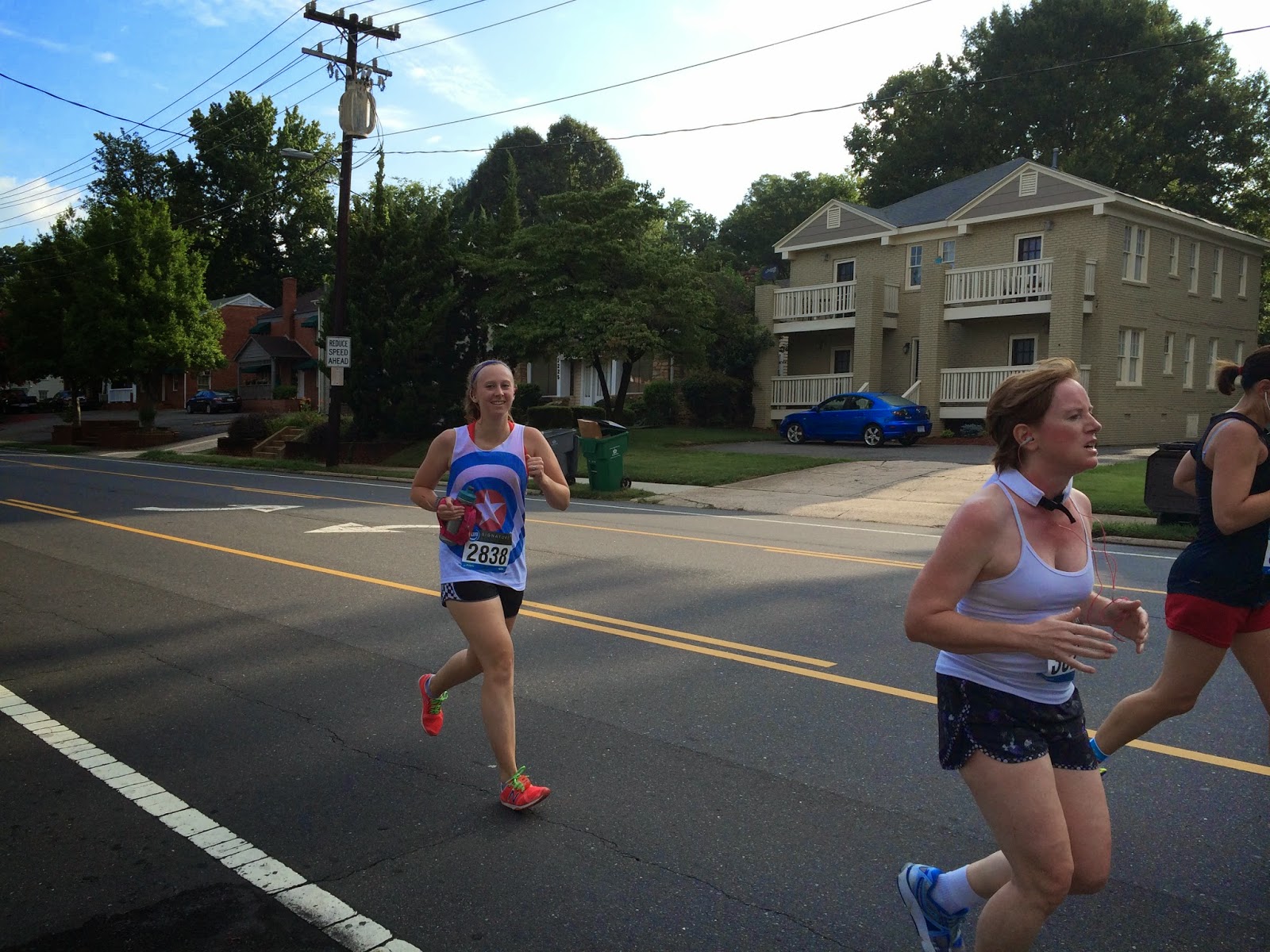 After crossing through the finishing chute, we were pleasantly surprised at what was waiting for us.  But let me back up first.  At packet pickup the day before, there were no packets.  All we picked up were bibs and tshirts.  No swag.  No bag.  No nothing.  We were a little bummed.  Now fast forward to the end of the race.  We crossed through the finish line, received a bag with a banana, bagel, and chewy bar in it, then we continued on around the bend to a whole EXPO!  There were lots of vendors lining the parking lot giving away tons of freebies.  So even though we didn't get a swag bag the day before, we sure got one then.  There was also a band playing, which added a fun atmosphere.  It was fantastic!

On the way home from all the race shenanigans, we were talking and we decided that this race was one of the best we've ever done.  I came to the realization that I had nothing, NOTHING to complain about regarding this race and my performance in it.  Usually, I think to myself, "Oh, I could have done better" or "My (insert name of a body part) was bothering me halfway through" or "My breathing was weird" or "It was too hot" (you get the idea....), but this race was different.  I felt like I had pushed myself as hard as I could, I was pleased with my time, and most importantly, I enjoyed myself.  Mr. Marathon agreed, and even though he placed 4th in his age group (no award....aww!) he really enjoyed this event.  But turns out, this was a good thing because he came in 4th place in his age group.... on a 4 miler.... on the 4th of July... cool right??We are even hoping to do it again next year!

The next race on the calendar is the Inaugural Martinsville Mustangs 5K this Friday!