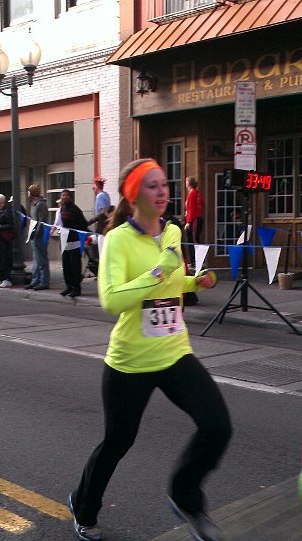 I apologize for the delay of this post.  Regardless, on Saturday, I ran the Jingle Bell Run 5K in Roanoke, VA.  The weather was absolutely perfect for running in my opinion.  The race was scheduled to start at 9 AM and it was just a bit chilly.  There were SO MANY PARTICIPANTS.  I could not believe the crowd!  Of all the races I have run locally, this seemed like the largest crowd I have ever seen.  That is wonderful, considering this race benefited the Arthritis Foundation.  The run was kind of disorganized, though.  I was very disappointed in that.  The start time as I mentioned above was 9 AM.  However, it didn't start until 9:15.  Then, at the first turn of the course, I freaked out.  I saw the hill.  The exact hill from a previous 5K.  It is a terrible, horrible, no good hill that is EVIL.  After I got to the top of the hill, I knew a downhill was coming so I relaxed.  BUT WAIT.  At the other 5K that took that course, we turned after the hill to a flat segment.  Not for this race.  For this race, we kept going straight.  Straight into another hill.  Identical to the one before it.  Then I tackled that hill, and ran around the block, only to meet these same two hills yet again.  It was a loop.  Of course.  So in total, I ran 4 terrible, awful, no good hills.  Blech.  Anyway, I finished in an acceptable 33:39.  Considering I have not been running regularly, and the four hills of doom tried to kill me, I feel like I did pretty well.  Sorry my picture is a blur, but I was running too fast.  Haaaah.  Also, Mr. Marathon and I took our first run together for the month, and we ended up running a little over 2 miles in a little over 21 minutes.  Not too shabby!  Hopefully, we have some more training runs coming up.

So, I decided that I wanted to do the 5K that is this weekend.  Kinda last minute, I know.  But anyway, this race benefits the Arthritis Foundation.  I have never run a race for a charity like this, but it's really cool how the fundraising page works!  I have never gotten to raise funds for a race before.... How it works is I have my own little profile, and anybody can just click GIVE NOW and make a donation.  Simple!  Also, you can leave little comments on my personal page through Facebook!  Totally awesome.  So anyway, if you would like to stop by my profile, HERE is the link!

So please please please check it out, and leave a comment for me while you're at it!  Maybe give a little if you're feeling generous. ;)

Until next time,
Mrs. Marathon

Well, it's that time of year again.  Holiday madness begins, the weather turns colder, sunlight is more and more scarce..... All of these things have one thing in common: they are NO GOOD for runners (well maybe not all runners... but Mr. Marathon and I don't like it).  Our training is taking a hiatus of sorts as we recover from all of our running in the past few months, and as we now regroup and rethink our training schedules for our upcoming goals.  The fact that Mr. Marathon has been getting out of work so late recently and that I have been working so hard finishing up my semester have also put a kink in our running.  By the time we both get home and ready to run, it's dark.  And not only is it dark, but it's cold.  Yuck.  Now, we're not trying to make excuses.  But we definitely need a new plan of attack for the holiday season.  I will be finishing with all my school stuff which will leave me with plenty of free time (until I find a job, anyway!) which in return will leave me with plenty of running time!  YAY!  But Mr. Marathon is still in a bind.  Any daylight he sees, he's either heading in to work or stepping outside on a quick break.  But hopefully he will be able to take advantage of some valuable running time in the next couple of months before his races start back up.

Oh, and we almost forgot.  Not really; we were trying to avoid it on purpose.  Anyway, there's no avoiding it any longer.... let's take a peak at last month's mileage numbers.  Yikes.  Fortunately we didn't set any goals....
Mrs. Marathon: 27.27 miles
Mr. Marathon 54.5 miles

Shameful, we know.  But no excuses.  We slacked off and took our little break, but seeing as my half-marathon is quickly approaching (81 days!) I need to kick it into gear.  I have two 5K's coming up that I would like to do, so maybe that'll give me the kick in the rear that I need.  And Mr. Marathon has the Martinsville Half Marathon (but so does Mrs. Marathon.... maybe....) in March that he has high expectations set for (1:29:59 or faster... he can do it!).  And he also has his fourth annual Blue Ridge Marathon (America's Toughest Road Marathon!) in April 2013 (goal: 3:59:59 or faster).

So for the month of December I have a few goals set.  Like I mentioned, I have two 5K's that I would like to try and run, and I also want to try to take a couple of good, long runs (10+ miles) to help me prepare to go the distance at Disney.  These goals are all weather-permitting, however.  So we'll see how it goes.  Hopefully we'll work out a better training plan, as well.  And hopefully we'll remember to post how things are going!
Posted by Mr. and Mrs. Marathon at 8:20 PM No comments: