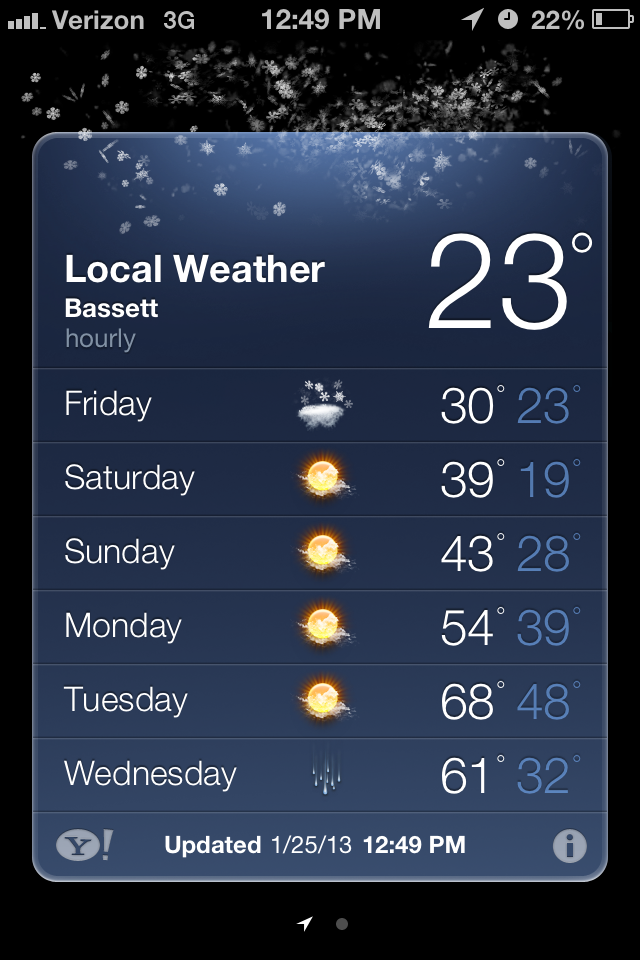 So, we're really not changing our names from Mr. and Mrs. Marathon, it's just a figure of speech.  However, we have a lot to update on.   Neither Mr. Marathon nor I have been running really, due to cold weather.  I have included the weather forecast from over the weekend to demonstrate how cold it was.  It has been cold, snowy, icy, and windy.  Ew. 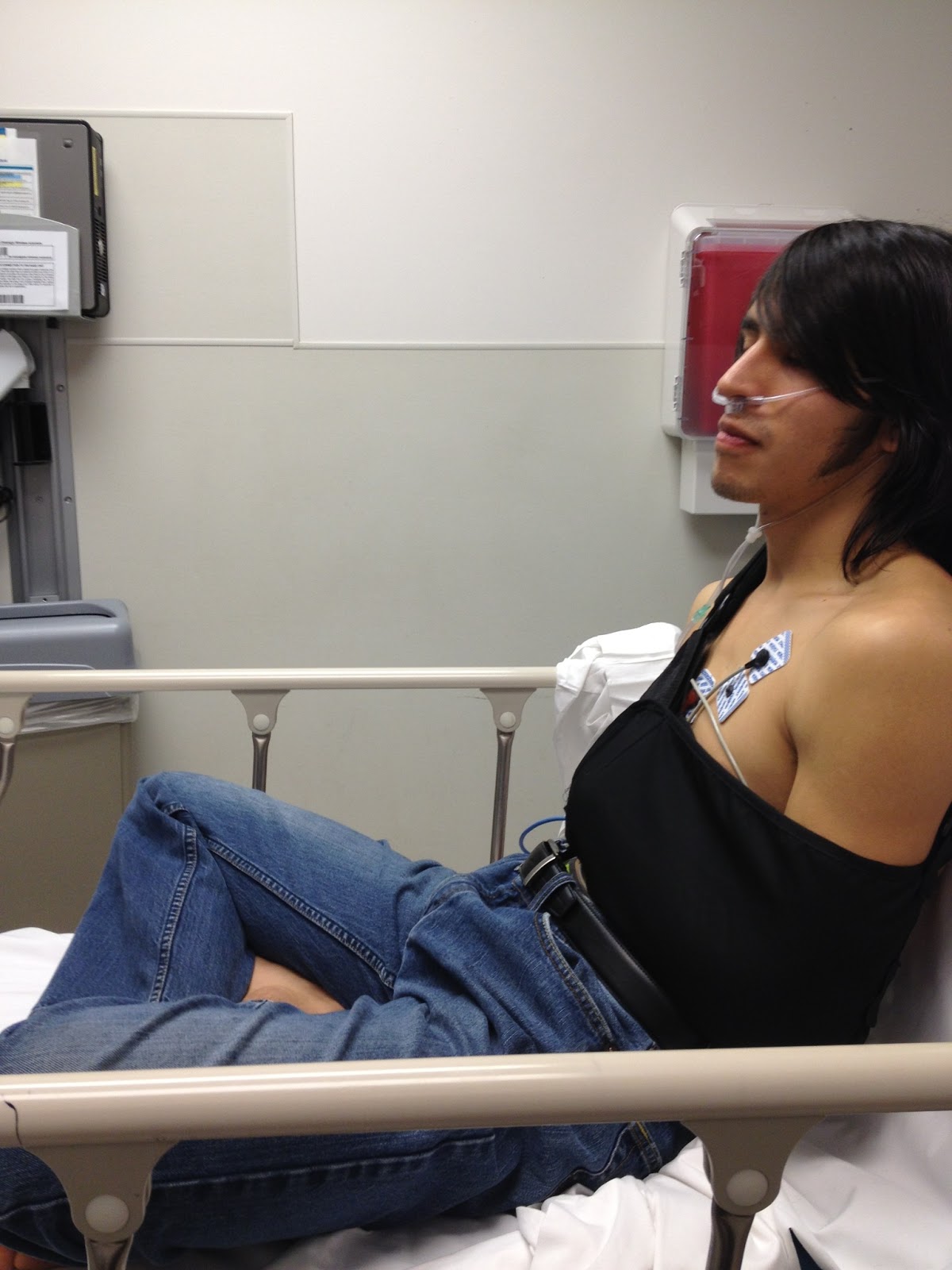 Well anyway, in addition to the cold weather, I have been busy babysitting.  Babysitting Mr. Marathon, that is.  He was playing soccer last Sunday, and he was the goalie.  He went to dive to block the ball, landed on his arm funny, and BOOM: dislocated shoulder.  He managed to wiggle it back into place, but then he went to his mother so she could give him a therapeutic massage because, obviously, it HURT.  Well, she was massaging, then BOOM.  It popped out again.  She put it back like it was supposed to be and continued rubbing then BOOM.  One more time it was dislocated.  Strike three, it was OUT.  It was not wiggling back into place this time.  Because he knew it was not going to pop back into the socket, we hurried to the hospital, and after about an hour of waiting, the doctor popped it into place in seriously 30 seconds.  Then we had wait an additional hour or so before he could be released.  His shoulder still hurts and it has been one week since he hurt it.  Oh, and he gets to wear a SHOULDER IMMOBILIZER (aka, a sling) for 14 days.  Which totally stinks because he can't do Insanity or run or pretty much do anything.

But that's not stopping me!  Today, despite chilly temperatures of 38 degrees and leftover snow and ice on the ground, I set off with my dad for a delicious 5.4 mile run.  Then this evening, I rocked out some Insanity. I'm pretty much a beast.  While Mr. Marathon is being a couch potato. 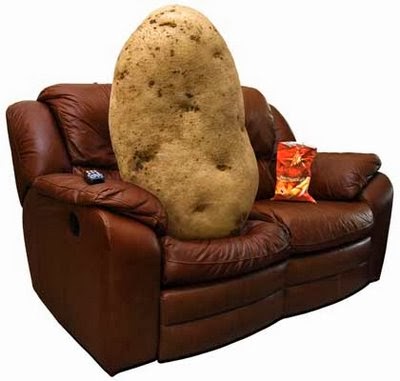 P. S. 25 days til my Disney Half Marathon!  My mom also helped me make my Jasmine tutu yesterday.  My costume is complete!
Posted by Mr. and Mrs. Marathon at 8:38 PM No comments:

INSANE IN THE MEMBRANE!!

Mr. Marathon and I went totally INSANE last week. We successfully completed Week 1 of our Insanity workout.  For the first full week of the year, we decided to kick it up a notch and run AND do our daily Insanity workouts.  We have kept up pretty well with everything, but that was only the first week.  Let's see if we can keep that up for the whole 60 days...  So anyway, for the month of January here are our mileage totals thus far:


Today we began Week 2 of Insanity.  We hope to see improvements soon!  On Day 1 we took the "fit test" to see where we were starting.  During the course of the program, the fit test is scheduled to track progress.  We will take the fit test again next week so we'll see if our INSANE work is paying off yet.

And by the way, I have received my Princess Jasmine aqua sports bra and gold shorts for the Disney Princess Half Marathon (38 days!!).  Now I have all the pieces!  I just have to make my tutu and headband and I'll be juuuuust about ready!  I just have to conquer a 13-miler.... DUM DUM DUMM.  Mr. Marathon has to get his Aladdin costume together, too.  And buy me a pet monkey.  And a magic carpet.  And a genie that comes from a magic lamp.  He'd better get busy.... slacker! 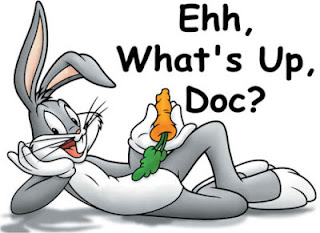 Or maybe Bugs Bunny meant what's up NEXT! Mr. Marathon here, with a weekend update. So Mrs. marathon and I, took off on a 3 mile run yesterday, yes I said 3 miles. since her half marathon is coming up in   approximately 45 days all my focus is on her, I want her to start her mileage low and increase it as she feels sure and comfortable of herself.  And she has proven that she can run the distance (as we know from her 10 mile run!) now comes the easy part: getting consistent.  She's got the skills, she's got the talent, and she got the confidence! Now it's time to take our training to a next level! We, as in I, had a long break and it's time to get running, and we have decided we may need some extra cardio work out to achieve that! So that's why Mr. and Mrs. Marathon have decided to take the INSANITY challenge in addition to our running! Our INSANITY DVD's are expected to arrive tomorrow, which is perfect to get it started on a Monday.  Wish us luck, because from what we've heard, we will need it...
Posted by Mr. and Mrs. Marathon at 10:05 AM No comments:

First of all, HAPPY NEW YEAR!  Mr. Marathon and I decided to start our new year off right, thanks to my dad.  My dad told me about his new year tradition of a New Year's run and we thought that was a wonderful idea, especially since we have been slacking on the running lately.  And by we, I really mean Mr. Marathon.  Okay, so me too.  Whatever.  Anyway, we woke up and hit the trail at 10 AM yesterday and took off before the rain started.  We ended up doing four miles, which was more than I anticipated doing, but it was fun and a great way to start off our new year.  So, here we are, looking hard-core but still adorably stylish after our run. 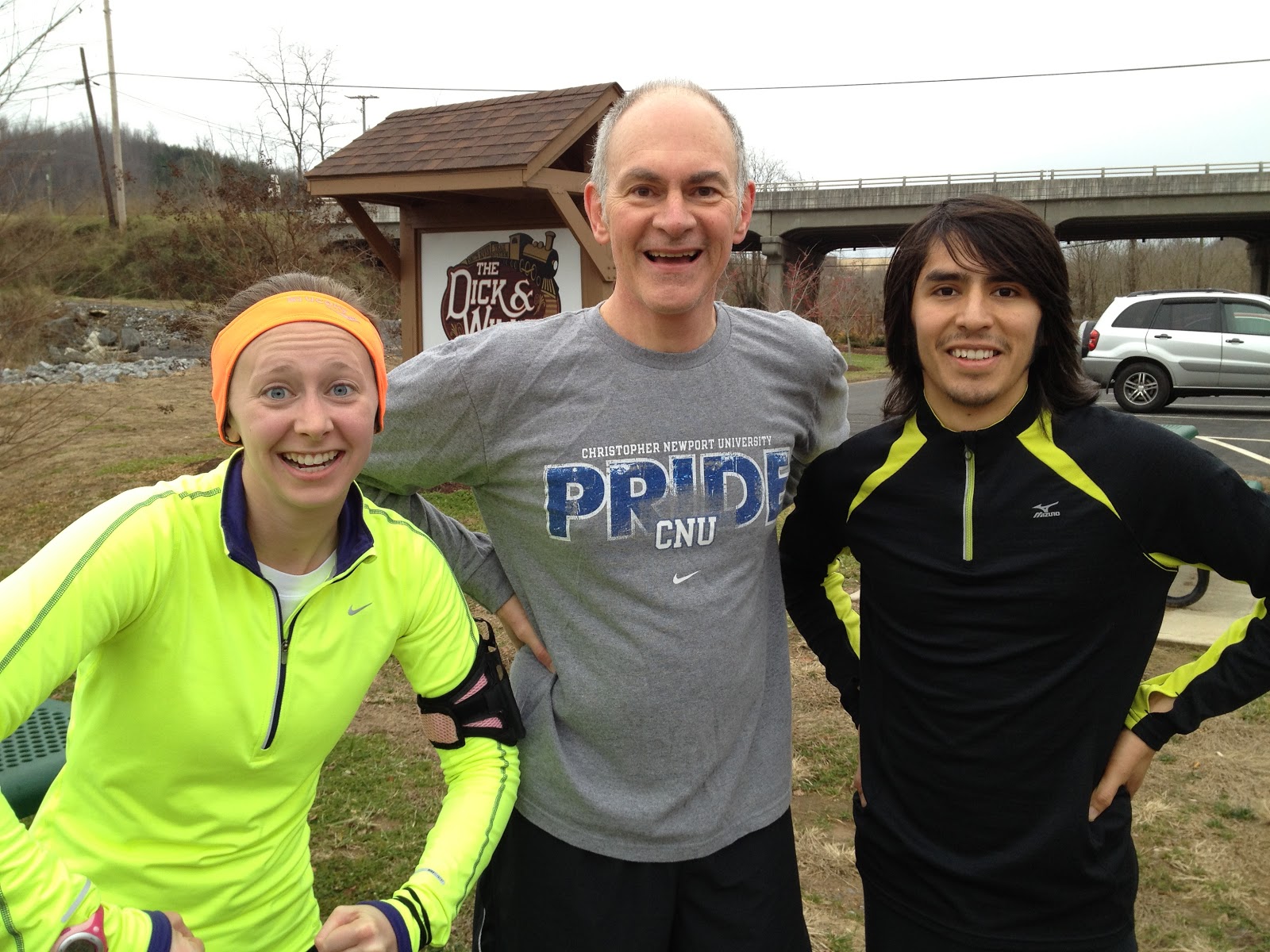 Also, FYI: my total mileage for the month of December was 26.264 miles.  For January, I don't have a total mileage goal set like last month, but I would like to do another long run (hopefully at least 13 miles) to prepare me for my half-marathon that is only 50 days away!  So excited!
Posted by Mr. and Mrs. Marathon at 10:35 AM No comments: