In addition to my awesome swag and gorgeous medal, I also gained something more valuable than any material item: experience.  Through this experience, I have learned many valuable lessons for my future half marathons (btw I am signed up for one on March 23.... eeep!).  So, now I will bestow upon you my pearls of wisdom based on my first 13.1-mile experience.  Note: I am speaking from personal experience.  Things on my list may not apply to you.  If something doesn't apply to you.... well, sucks for you.  Just kidding!  Kind of... Anyway, feel free to email or comment any other pearls of wisdom you'd like to share with me.  Seriously, I need all the advice I can get.  Moving on... heeeere we go!

So there you have it.  Six important lessons that will help guide me to better half-marathoning in the future.  Some of these lessons might seem really obvious, or even a little silly, but this is just what I took away from my experience at the Disney’s Princess Half Marathon.   Also, like I mentioned, I am not trying to make excuses for myself.  I really took note and will do better next time!  It’ll be easier since I won’t be spending the whole day before running around like a 5-year-old on crack (probably?).  I will be much better prepared for March 23:  The Martinsville Half Marathon!
Posted by Mr. and Mrs. Marathon at 10:16 PM No comments:

Email ThisBlogThis!Share to TwitterShare to FacebookShare to Pinterest
Labels: 13.1, half marathon, motivation

Yesterday was the day we've all been waiting for!  Well, I have been waiting for it, anyway.  You might not have been.  Or maybe you were.  Either way, yesterday was the Disney's Princess Half Marathon!!  Mr. Marathon and I headed out for the airport on Friday (which was also my birthday!  and George Washington's birthday!) and flew into sunny Orlando.  We checked into the All Star Sports Resort at Disney World, then headed to the Race Expo for packet pickup.  It.  Was.  CRAZY.  Seriously, I have never seen that many people in one place in my life.  But, there was a lot going on and a lot to see.  On Saturday, we woke up bright and early (so we thought) and headed to the parks.  We spent the day at Hollywood Studios and the Magic Kingdom having fun, riding rides, eating deliciously unhealthy food, and seeing everything we could possibly see.  At the end of a long day of fun, we returned to our room and hit the hay because we knew what time we would have to wake up in order for me to make it to the starting line on time for Sunday's race.  First of all, let me say that the race was scheduled to start at 5:35 AM.  Ridiculously early right?  That's earlier than I wake up to go work on a regular weekday.  Ew.  So now let's work backwards to discover the time we had to actually wake up, shall we?

5:35 Corral A start
5:00 Recommended time to be in starting corral and ready to go
4:15 We allowed 45 minutes for walking, waiting in line for the shuttle, riding the shuttle, and navigating the starting area
3:15 I need at least an hour to get up and going, because of course I had to look beautiful.
3:00 In case I decide I need 15 minutes of extra sleep, I need to wake up 15 minutes earlier than I think.

So, I was awake at 3 AM.  Seriously.  But anyway, I got everywhere mostly ok, then the race began with singing and fireworks and all that other magical stuff, and I ran my very first half-marathon, mostly successfully.  I may not have finished in my goal time, but I did finish still running.  In the interest of keeping my posts here fairly short and sweet, I will end this one right here.  I will, however, post about something else I got from this experience, besides plenty of souvenirs and a blingin' medal.  Stay tuned, it's coming super soon.  Promise!

And the Rockets GREEN GLARE! 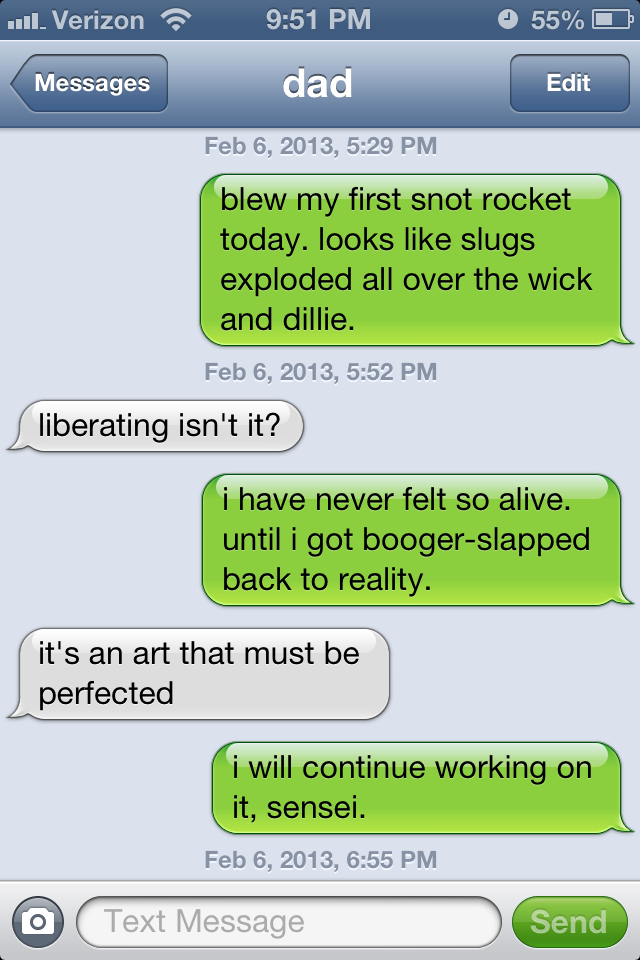 The first half of this post is not for those readers who are faint of heart.  It is probably TMI, but I'm sure you'll find it humorous.  Or disgusting.  Or hopefully a little bit of both.  Earlier this week, I had a great run.  I decided to just do 4 miles, and I ended up running it in a time that was a personal best for me!  I was so excited.  But that was not the only triumph.  I also conquered a fear of mine.  I'm kind of a priss sometimes, and if I am caught with a runny nose without a tissue, LORD HAVE MERCY.  Well during my run, I did not have any tissues and my nose started running faster than me after one mile.  So I swallowed my pride (and NOT my boogers) and let it rip.  Yes, I blew a snot rocket.  Here is a text message exchange between me and my father following the incident (for the record, I do call the Dick and Willie trail where we run the "Wick and Dillie" because I say it that way on accident so often.  It's not a typo).  I shared this info with him because since he has been a runner for so long, he's pretty much a pro at snot rockets.  I just knew it would make him proud!  For those of you who are unaware of the definition of the phrase "snot rocket," here is a definition, courtesy of Urban Dictionary:

On another note of pride, today we tackled an 8 miler with the assistance of a furry friend.  Mr. Marathon and I are dogsitting this weekend so we had to bring our weekend dog along with us.  He was totally showing off, but the only reason that dog ran better than me was because he had two extra legs.  Totally rude.  So today our running group consisted of me, Mr. Marathon, our four-legged companion, and my dad.  I am SO PROUD that my dad joined us today.  He's pretty much one of my main inspirations for running.  He's been running for so long, and I hope that I can stay as committed to running as he has, although he'll totally try to tell you otherwise (he's so modest!).  So my training is going well and my half marathon is only 12 days away!  SO CLOSE!!!!!!  AND Mr. Marathon's costume is finally complete as well.  We're ready!
Posted by Mr. and Mrs. Marathon at 7:52 PM No comments:

So, It's February? When Did That Happen?

January has come and gone faster than I realized. So now February is here and rolling right along. My half-marathon is later this month and I am freaking out!!!! So this month my training kicks into high gear. 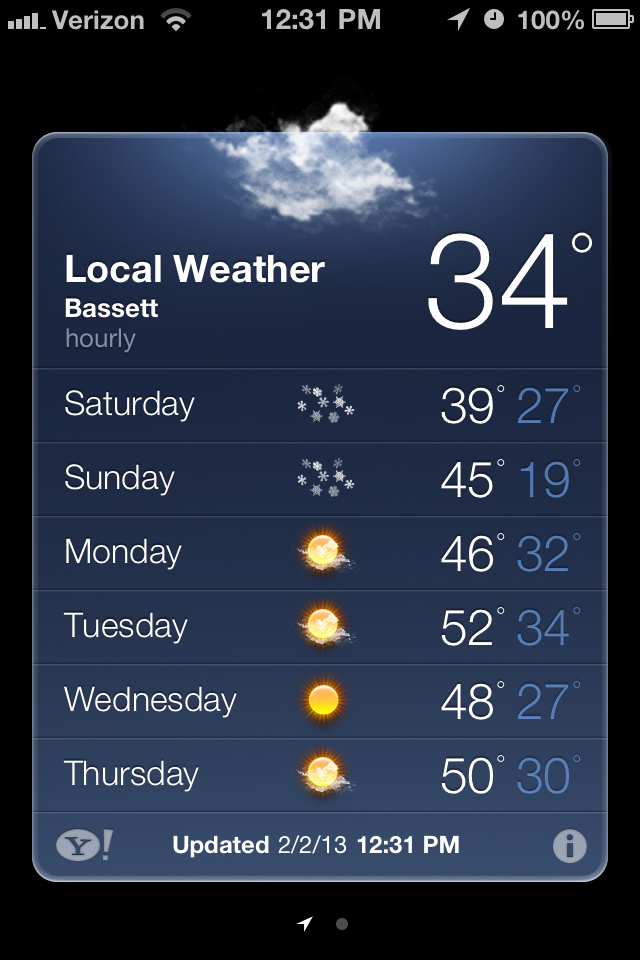 Last month, I ran a grand total of 23 miles.  Not too impressive, I know.  Regardless, the weather has been crazy and unpredictable for the past few weeks, so it has been really difficult to make a plan (and stick to it....).

This past weekend, we decided just commit and go for a training run (finally).  We did a nice 6 mile run at the Dick and Willie, despite the super cold temperatures and the threat of snow (see weather forecast from last week).  Mr. Marathon, my dad, and I set off despite these factors and made good time.  So, we decided that this upcoming weekend, we will kick it up a notch and do an 8 mile training run.  As of right now, the weather looks promising, but we'll see about that.

With only 15 days until race day, we have to have a pretty intense training schedule, so whether it's raining, snowing, cold, hot (this is unlikely, but I won't rule it out), or windy, we gotta just RUN.  Wish us luck... because.... we will need it, quite frankly.  But we can totally do it!